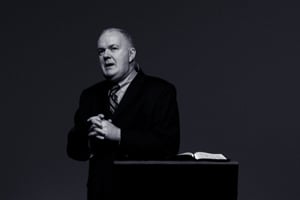 Dr. Derek W.H. Thomas is the John Richards Professor of Practical and Systematic Theology at Reformed Theological Seminary in Jackson, Miss. He is also the minister of teaching at First Presbyterian Church in Jackson and editorial director for The Alliance of Confessing Evangelicals. Among Dr. Thomas’ many books are Praying the Saviour’s Way, Mining for Wisdom, and Calvin’s Teaching on Job. Dr. Thomas addressed the question How Do We Know Which Interpretation is Right?

WE HAVE SOMETHING MORE SURE

“For we did not follow cleverly devised myths when we made known to you the power and coming of our Lord Jesus Christ, but we were eyewitnesses of his majesty. For when he received honor and glory from God the Father, and the voice was borne to him by the Majestic Glory, “This is my beloved Son, with whom I am well pleased,” we ourselves heard this very voice borne from heaven, for we were with him on the holy mountain. And we have something more sure, the prophetic word, to which you will do well to pay attention as to a lamp shining in a dark place, until the day dawns and the morning star rises in your hearts, knowing this first of all, that no prophecy of Scripture comes from someone’s own interpretation. For no prophecy was ever produced by the will of man, but men spoke from God as they were carried along by the Holy Spirit.”

Note the “we have something more sure” — more sure even then a voice from heaven!  This something is the Word of God:  The 66 books of the Old and New Testament. Every word and sentence, in all of its diversity, comes from one Author.  I believe in verbal, plenary inspiration. Scripture is the very voice of God. Infallible and inerrant.

I believe the Bible is the Word of God because it says so. That may sound circular, but if the Bible is God’s word, what higher authority can there be on the Bible but the Bible itself?  As Calvin said, the Bible is self-authenticating.

Is the Bible full of contradictions?

No.  There are things in the Bible that we do not fully understand. A few challenges:  Matthew and Luke have different names for Joseph’s father.  Luke 3:23 says “Heli” and Matthew 1:16 says “Jacob”.  But that could be because Joseph’s mother was a widow who remarried, or because Joseph was regarded as a son by his father in law.

Similarly, the accounts of those who visited the tomb on Sunday morning can be reconciled.

2 Sam 24 says that God provoked David to number the people. And Chronicles says that Satan did it.  But we see this elsewhere, as in the account of Jesus’ crucifixion in Acts 2: God foreordained it, and lawless men did it. Likewise here: God provoked David, through the instrumentality of Satan.

OUR INTERPRETATION IS NOT INERRANT

The Bible is without error, but our interpretation of the Bible is not inerrant. We need to be humble as we approach the Scripture. God’s thoughts are not our thoughts, and not all has been revealed to us (Deut. 29:29). Sometimes we are prone to resist the truth taught be a text. And even Peter said that some of the things that Paul wrote are hard to understand (2 Peter 3:15-16).

THE PERSPICUITY OF SCRIPTURE

Today, we ask Is there meaning in the text? We need systematic theology; we need a big picture. All the little details fit into the big picture. The Westminster Confession of Faith exhorts us to interpret the less sure parts of Scripture in light of the more sure parts. We also believe the Scriptures are perspicuous: an ordinary Christian can come to an understanding of salvation and to a basic grasp on the over-arching message of Scripture.

SCRIPTURE HAS ONE MEANING

Because God is the one Author.  There can be no other meaning to a passage than the meaning that God intended.

SCRIPTURE IS ITS OWN INTERPRETER

James is speaking of the evidence of faith when he says that we are saved by works. We therefore need to have modesty with regards to building an entire doctrine on one test.

INTERPRET OBSCURE PASSAGES BY THE MEANS OF CLEAR PASSAGES

Passages like I Peter 3:18-22 must be interpreted by other passages. Some interpretations (for example, the one that indicates the “spirits in prison” are in purgatory) are clearly incorrect. We’re told elsewhere that it is appointed to man once to die and after that the judgment (Heb. 9:27).

Some passages are poetic and others are apocalyptic. God is not a chicken with features, as some passages liken Him to.

The Old Testament writers spoke prophetically about the day of Christ, and what would follow, but they themselves did not know all that would be entailed with the Christian era.

DISTINGUISH BETWEEN DESCRIPTION AND PRESCRIPTION

Noah getting drunk is a description of what happened immediately after the flood, but we ought not to go and do likewise.

NO INTERPRETATION CAN EVER CONTRADICT THE GOSPEL

The gospel of salvation in Christ is clearly conveyed in Scripture. Hence, our interpretation of a particular passage cannot contradict the gospel.  If it does, we know that interpretation is incorrect.

Beware of word studies. Sometimes the root or origin of a word does give insight into the meaning of a word, other times it does not.  For example, the word “nice” comes from a Latin word for “ignorance”.  Yet “ignorant” is not at all part of the meaning of our word “nice”.

BEWARE OF A FALSE CHRISTO-CENTRISM

SO WILL WE ALL HAVE THE SAME INTERPRATIONS?