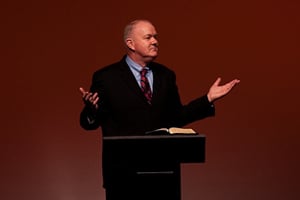 For the third session today we came to another difficult question and it fell to Derek Thomas to answer it: If God is good (or since God is good), how could he command holy war?

He turned to Joshua 6 (the story of Jericho) introducing it by saying this is a topic you speak on only because you believe in the inerrancy of Scripture; it is both solemn and heart-rending as we discuss the killing, the slaughter, of men, women, children, babies. These are the kinds of passages in Scripture that make some people believe that the Bible cannot possibly be the inerrant Word of God.

There are four aspects to this narrative: Joshua’s encounter with the captain of the Lord’s army (and here we come to the question of whether the will of Joshua will submit to the will of the Lord); the account of the collapse of the walls of Jericho; the salvation of Rahab; the destruction of the people. And this fourth part is the one that concerns us as we ask how a good God could command such a war. We have to be careful not to glamorize this story because it is about brutal violence, about blood, about destruction by instruments of war. How could God possibly command the killing of babies?

The Pentateuch has set this up as a just act on God’s part, a righteous act. There has been a clue back in Genesis 15 that though Abraham was promised the Land, he could not receive it immediately because the iniquity of the Amorites was not yet full; it was only when ungodliness reached a certain level that God would devote them to destruction. Joshua and his men would be implements in that policy of holy war.

Thomas structured his message around three points: the concept of holy war, the ethics of holy war and the ethics as it specifically applies in the Old Testament.

The concept of holy war. This passes over any kind of defensive war, but looks specifically to the holy wars, the kind of war that was set apart to this specific purpose. Only God could declare such a war and in such wars soldiers had to be consecrated to the Lord. The cities and people that were to be attacked were to be fully devoted to destruction.

The ethics of holy war. Our doctrine of inerrancy, our belief that all of the Bible is the Word of God, tells us that what we have in Joshua 6 is not mere description but actual prescription. Joshua did these things because God explicitly commanded them. It was not Joshua’s policy, but God’s. This is the policy of Jesus, of the One who is Love. He is the one who commanded complete annihilation and destruction.

This kind of holy war is not something we can immediately draw into a New Testament concept, whether through thinking it may be ethical to shoot an abortionist today or in thinking that a nation like Israel is justified in waging war because “they are God’s people.” We may not take up a sword today and engage in a crusade against anyone else; there is a radical distinction between holy war as it applied to the Old Testament Israel and what applies to the modern state and what applies to the New Testament church. So when we discuss ethics, we are asking how it is ethical within its context, within the unfolding timeline of the narrative of Scripture.

To even begin to answer this question, we must grasp the heinousness of sin, we must understand that God is so holy that he cannot look upon sin. God is so holy that he cannot just will you to be saved, but instead must send his Son to suffer his wrath to make propitiation. One of the reasons we find this ethically difficult to understand is that we have such a low view of sin.

What is happening in these holy wars is a breaking into the world of here and now, into this space/time continuum in which Joshua lived, of the judgment that will be evidenced in the last day. This is an intrusion ethic, an eschatological intrusion of the end into now for a special reason— in this case because of God’s desire to have Israel occupy the land of Canaan so within the flow of redemptive history Jesus would be born and we would be saved. God is love, but he is holy love and cannot spare the ungodly. Here is a bigger question: why does God not judge us, given the fact that millions of unborn children who bear his image are aborted? If God were to do so, he would be altogether just! If you do not believe this, you do not believe in the God of Scripture. There is coming a day when Jesus will come on the clouds of heaven but he will separate one to his left and one to his right and will say to hundreds of millions, men and women and children, “depart from me into everlasting fire, into hell.” What happened to Canaan will be as nothing on that day.

Holy war tells us that the love of God is a holy love. This is just a glimpse of what awaits those who are outside of Jesus. What an enormous blessing it is that today is a day of grace, a day when we can call upon the name of the Lord and be saved.