The next question fell to Alistair Begg who was to answer this: Is the exclusivity of Christ unjust?

One of the reasons that people turn away from Christianity, he said, is the exclusivity of the truth it proclaims. But we as Christians are called to unapologetically affirm what the Bible makes clear. He wanted us to think about this doctrine of Christ’s exclusivity in terms of its content, its context and then what it means to make contact with it in our culture. 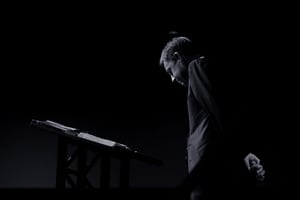 First he spoke of content. The Bible speaks in a straightforward way about there being only one way to the Father, only one mediator and only one name in which salvation is to be found. So we accept that Jesus’ name is above every name and all of history is moving to a day when every knee will bow and every tongue will confess this.

Second he spoke of context. The notion of Jesus as man and God was ridiculous to the people of the biblical times as it is to so many today. There was great pressure to capitulate and to say that Christ was less than one or the other. Persecution was either certain or a distinct and immediate possibility. Today, in our cultural context, we are not expected to seek out objective truth but to find subjective kinds of “truth,” to ask what the passage means to me. And then we end up deconstructing the Bible on that basis so it’s now subjected to my feelings, to what it may happen to mean to me. We are told to harmonize all religious experiences so as to create one universal experience for all of mankind. We see this now in ecology which is often seen as the one universal experience that binds us all together (as in the movie Avatar).

Third, he spoke of contact saying that any time a speaker has three points each starting with the same letter, one of them will be a dud. And that’s this one, but he needed the third “c” word so went with contact.

An awareness of the content does not mean we will be effective at sharing that content. We need to make contact. We can be convinced of the validity of that to which we hold true and yet when it comes to real engagement with those who are far removed from such affirmations, we find we’re not doing so well. There are three concerns:

Arrogance - In a context where there is no truth, but only truths, no principles, but only preferences, we face the challenge of being regarded as arrogant for proclaiming Jesus.  Christians are supposed to be humble, but if Christians were truly humble they would not say they have it right and others have it wrong. This question needs to be addressed from two sides. We have humility in the wrong place—we need to doubt ourselves but hold strong to the truth and not the other way around. This is not about pride and humility, but about fact. The other side is that we may communicate what we believe badly, that we can do so with undue force or undue embarrassment.

Tolerance - One of the reasons for our silence is that we’re afraid of being thought narrow and intolerance. We need to rescue tolerance from the notion that it means every viewpoint is good and valid. True tolerance involves treating with integrity and humility those whose opinions I believe to be untrue and invalid.

Relevance - The uniqueness of Jesus is inescapable. Christianity is either superior or totally irrelevant because it makes affirmations that other religions deny (such as the eternal Christ becoming incarnate and dwelling among us). The relevance of our proclamation is found in the fact that though our culture says religion offers little stories for each little group with no over-arching story, no panoramic view, the Bible says that the entire story is the story of our alienation and God’s reconciliation. It tells us of this big picture of all of history. Is it then unjust or irrelevant to say that someone has come to bring reconciliation to our alienation?

As Christians we are not free to believe what we like or it is not the gospel we believe but ourselves. Whenever the church loses the urgency and the relevance of the gospel, it loses its desire to call men to believe this gospel, to call men out of sin and to the Savior.