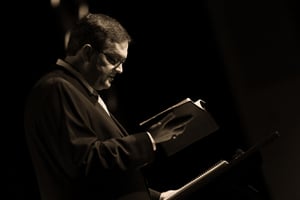 To start the final day of the 2010 National Conference, Albert Mohler was given one of the most difficult questions of all: why does the universe look so old?

He said that there are really only two options for us to follow when we seek an answer: either the world is, indeed, old or the world looks old but is not as old as it appears. He began by reading Genesis 1 and, having done so, affirmed that a straightforward reading of the text tells us of 24-hour days, 6 real days of creation and one real day of rest. And, indeed, this was the overwhelming, untroubled consensus of the church until the 19th century. However, since then four great challenges have arisen:

When we ask why the universe looks so old, we have to keep each of these challenges in mind. But first we need to ask just how old the universe appears to look. This span of time has grown exponentially since people first began to ask the question so that the age of the earth has gotten older and older. Currently the consensus (such that it is) for the age of the earth is that it is roughly 4.5 billion years old while the universe is 13.5 billion years old.

Mohler then asked this: what is the urgency of this question? The answer is that there is great urgency in adequately addressing this question. There are some recent developments that indicate why this is so. The controversy concerning Bruce Waltke is just one example—Waltke said recently that unless we embrace evolution, evangelicalism will be reduced to the status of a cult. Meanwhile, we are constantly faced with supposed facts that science presents a challenge that must be embraced by the church. The current mental environment in which we live is an environment shaped by the intellectual assumption that the world is very old. To speak in confrontation to that environment comes at a significant cost. Even greater urgency is pressed upon us by the new atheism.

Mohler presented four major options available to us when we think about the age of the earth and the interpretation of the first two chapters of Genesis.

The traditional 24-hour calendar day view. This is the most straightforward reading of the text and affirms that the Bible teaches a sequential pattern of 24-hour days.

The day-age view. In this view what is argued is that the Hebrew word for “day” need not always refer to a 24-hour calendar day but might refer to an indefinite and presumably long period of time. Such days are overlapping and not entirely distinct.

The framework theory. This theory leaps over the question of the length of the days saying that this is only a literary framework and that the early chapters of Genesis represent a literary way of discussing a scientific reality. We are not to trouble ourselves about the length of time or the order and sequence of the days, but rather are to see that this is God providentially ordering creation for his glory.

The literary theory. Here we take the first eleven chapters of Genesis as literary, understanding that the Creation story is merely myth, a story as understood by ancient Hebrews.

We must note that only the first of these options necessitates a young earth. All of the others allow for, even if they do not require, a very old earth.

The literary theory has to be rejected out-of-hand since it otherwise contradicts inerrancy. We cannot hold to a robust theory of biblical inerrancy and interpret the chapters in this way.

The framework theory is held by some prominent evangelicals but it is one of the least defensible positions when we realize that it is based not just on a long period of time but that the sequence does not matter. It is simply not credible that God gave us a text with such rich detail and sequential development so we might only learn about his providential direction.

Mohler proceeded to argue for the theological necessity of understanding a young earth and 24-hour calendar days. He presented two great issues that arise when we allow for a day-age theory or any other old-earth understanding of creation.

The first issue concerns the integrity of Scripture. He conceded that many of those who hold to a day-age view are seeking to believe it without doing violence to the inerrancy of Scripture. And yet there are many issues that must be addressed. What is sorely lacking in the evangelical movement today is a consideration of the theological cost of such a view. This entire conversation is either missing or marginalized in the church today. The exegetical issues are real and the exegetical evidence based on a Reformation understanding of Scripture leads to a natural understanding of 24-hour days in creation. Mohler would allow that it might be possible that he is over-reading the text in this regard. For this reason we must hear the warnings of those who hold to an older view of the universe since it is possible that we may be creating an intellectual problem that is not necessary. And yet he simply finds that the exegetical cost and the theological cost is just too high.

An old-earth review raises at least two important issues. First, it raises the issue of the historicity of Adam. Paul bases his understanding of human sinfulness and Adam’s headship over the human race on a historical Adam and a historical Fall. An old earth understanding has serious complications because the old earth is not merely understood to be old but also through its age telling a story. The story it is telling is of billions of years of creation before the arrival of Adam. How then can it account for a historical Adam? An old earth understanding requires an arbitrary intervention of God in suddenly creating Adam and depositing him in the world. This presents problems both in Genesis and Romans.

The second question it raises regards the Fall. We understand from Genesis 3 and the entire narrative of Scripture that what we know in the world today as catastrophe, as natural disaster, as pain, death, violence, destruction, predation—that all of these are results of the Fall. We end up with enormous problems if we try to interpret a historical fall in an old-earth rendering. This is most clear when it comes to Adam’s sin. Was it true that, as Paul argues, when sin came, death came? Keep in mind that if the earth is old, and we determine it is old because of the scientific data, it also claims that long before the emergence of Adam there were all the effects of sin that are biblically attributed to the Fall. No Christian reading of the Scripture alone would ever come to this kind of conclusion. And once you come to such a conclusion it is very difficult to reconcile with the Bible. If the animosity between the lion and the lamb predates the Fall, what joy or purpose is there in saying that they will be reconciled in the consummation?

The avoidance of this question about the age of the universe will come at the cost of our own credibility. But disaster ensues when the book of natural revelation is used to trump the book of special revelation. We would not be having this discussion today if these questions were not being posed to us by those who assume that general revelation is providing to us compelling evidence that forces us to reconstruct our understanding of the biblical text, that the assured results of science are forcing us to rethink what the Bible seems to say. Great caution is in order when we begin to cede to science. The assured results of science—what do they tell us about a virgin birth? About a resurrection? About sexual orientation? Are we going to submit special revelation to what science says in all of these areas? The end of this process is theological disaster.

When it comes to the confrontation of evolutionary theory and the gospel we have a head-on collision. It is our responsibility to give an answer to this question of why the universe looks old, but the most natural understanding comes to this: the universe looks old because the Creator made it whole. When he made Adam, Adam was not a fetus but a man. By our understanding this would have required time. But for God it did not. He put Adam in the garden, which was not merely seeds, but a fertile, mature garden. God creates and makes things whole. And secondly, it looks old because it bears the effects of sin, the flood, catastrophe. Creation is groaning and in its groaning it looks old and worn, giving us empirical evidence of the reality of sin.

In the end the conclusive answer to this question is known only to God. This is where we are left; and it is a safe place to be.