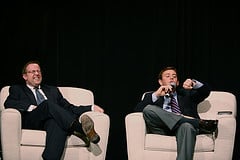 For Dr. Horton:  “You said that we are not an extension of Christ’s kingdom.  How does that cohere with our being the body of Christ?  Our being the hands and feet of Christ, as it were?”

HORTON:  We bear witness to the redemption that Christ has wrought.  Yet we are co-workers with Christ, because we are proclaiming him.  The difficulty is that  sarx and soma are sometimes confused. We are not made one flesh with Christ.  We are made one with Christ by the Spirit.  He is the first-born from the dead.  We have an organic, covenantal relationship, but there is not a fusion between the believer and Christ.

“What is our (the church’s) relationship to Israel?”

HORTON:  There is a difference of opinion among Reformed believers about the relationship between the church to ethnic Israel.  I myself did a “flip” on Romans 9-11.  “Thus all Israel will be saved.”   I don’t think we should go back to some sort of rebuilt temple in Jerusalem.  I don’t think the largely Gentile church replaces Israel.  The grafting in of the Gentiles is the fulfillment of the promises to Israel.

My old view is that there was no future for ethnic Israel;  everything was happening now in the church (nothing more than a “remnant” of Israel being saved).  But now I am more open to their being a future outpouring of God on the people of ethnic Israel.  I was moved toward this view by  folks like Ribberbos and Hodge.

BEGG:    I agree with much of what Mike just said.  And it is not a simple replacement theology.

“How does the Jewish view of substitutionary atonement differ from the Christian understanding?”

BEGG:  The Old Testament people were looking forward and we’re looking back.

From Sproul to Horton:  Was salvation a different economy back then?

HORTON:  Paul contrasts the Mosaic law with the Abrahamic promise.  The contrast is between the conditions by which the Israelites could stay in the land (Mosaic law) and how an individual can be saved (Abrahamic promise).   Abraham was saved by grace alone through faith alone.

For Begg:  You quoted Karl Barth.  Was Barth correct when he wrote that Christ was “the elected man” and that all people are “in Christ.”

BEGG:  Yes, Christ was the elect man.  But not all people are in Christ.

SPROUL:  Barth said he wasn’t a universalist, but he was.  He said that God’s “yes” extends to everyone; although we can resist it, God will triumph over it.

“Could you please expound on what the federal vision is?  It is tearing up my church.”

HORTON:  Federal vision is an over-reaching against what is perceived as a baptistic tendency to see the sacraments as merely signs.  And the over-reaching ends up viewing baptism as (essentially) regenerative.  In contrast, Reformed theology has classically understood there to be a distinction between the covenantal community and those who are indeed regenerate.

So you go to Hebrews 6 and you see language of “tasting, participating.”  But “like dry ground drinking in the rain often, it doesn’t bear fruit…..but we are confident of better things with you, brothers, things that accompany salvation.”

Federal Vision folks define justification differently.  Classically, Reformed theology believes that saving faith is a resting and receiving.  It doesn’t (itself) include obedience.

Federal Vision is often confused with the new perspective on Paul; they are not the same.  The PCA studied both of them and came to the conclusion that both of them are outside the historical norm.

“Should we be praying for material needs (our daily bread), or should we not be anxious about such things, and rather pray for spiritual needs?”

BEGG:  There is a simplicity to asking God to meet our basic needs. Particularly in what we call the third world.  We should not be anxious about our material needs, but rather pray about them (along with spiritual needs) and then thank God as He provides.

“How do we interact at the graveside with the death of a loved one who was not a Christian?”

BEGG:  I never want to guild a lily.  I don’t want to appear to have a theology for one party and a different theology for another party.  My approach is to affirm for the person left behind the availability of and the character of God in relationship to them.  As believers, we should enter into the heartache and the loss. Often our deportment at such times will convey more of what is useful in the moment.  We may need to wait for much later to say more.

“Should my husband and I leave our church….”

“Why would our current church service be patterned after a covenant renewal ceremony, when that only happened a few times a year in the Old Testament?

SPROUL:  It happened more than a few times a year.  Joshua 24 is a good example of it.  But covenant renewal was also associated with succession — with passing down the baton to the next generation.

I once suggested that the Lord’s supper was both a covenant renewal and a dynastic succession event.  Jesus “turned us over” to the Holy Spirit.  And Jesus used covenant renewal language when he instituted the new covenant.  What do you think of that?

HORTON:  Yes. And it is important to establish which covenant is being removed.  There are some covenants in this world that are negotiated.  But a suzerain didn’t negotiate the terms of the covenant:  You obeyed or you were out.

Briefly, there is a similarity between Genesis 15 and the Sinaitic covenant.  God says “I will do this…”  (promise).  And God (rather than Abraham) walked between the body parts (as the weaker king normally would).  Then at Sinai, Israel makes a promise, and they (Israel) fail to keep it.  And then at the Lord’s supper, Jesus promises to walk through the pieces on their behalf (“my blood, for you.”)  Jesus pays for their failure to keep the covenant.

“Is the Mosaic covenant a republication of the Adamic covenant?”