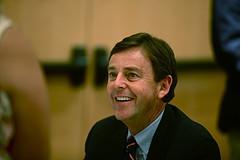 Alistair Begg led us off with the first session. Dr. Begg has served in pastoral ministry for over thirty years, ministering in churches in Scotland and the United States. He has served as senior pastor of Parkside Church in Cleveland, Ohio, since 1983, and he can be heard teaching daily on the radio program Truth for Life. Dr. Begg is a sought-after speaker and writer, and he has written many books including The Hand of God, Lasting Love

, and Pathway to Freedom.

The topic of Dr. Begg’s message was He Is Not Here — The Significance of the Empty Tomb.  He took his text from Luke 24, verses 1-27 —- the powerful account of Jesus’ post-resurrection conversation with His disciples on the road to Emmaus.

Dr. Begg began by noting that he often images people singing songs.  The disciples on the road to Emmaus might have thought to themselves “it’s all over now.”  They were speaking about the events of Jesus in the past tense. “But we had hoped that he was the one to redeem Israel.”  The Old Testament pointed to the coming of a prophet par excellence. But at this point the disciples were both amazed and confused.

The downcast faces of these disciples represented their logic:  a crucified Messiah was a contradiction in terms.  The plot line of their story has been thoroughly turned on its head.

Going back to the women (at the beginning of Luke 24), they were going to bring spices. They were not going to witness a resurrection.  They were unprepared for what they found — or rather didn’t find.  They did not find the body of the Lord Jesus.

Then they were confronted by a strange sentence: “Why do you look for the living among the dead?”  But they weren’t looking for the living. They had embalming material with them.  The angel asks if they remember what Jesus had taught concerning His death and resurrection. Clearly the women had not remembered.

So the ladies reported this to the disciples, who were eager to hear of it.  No.  They were hiding like a bunch of chickens.  Eventually, Peter went to investigate the matter, but he walked away from the empty tomb confused.  Either the disciples were going to need to find another Messiah or altar their expectations completely.

In Acts 2, we see a different Peter. We see Peter giving a masterful treatment of what has happened in the whole sweep of redemptive history.  The dramatic transformation of the disciples was a tribute to the Holy Spirit’s new covenant ministry.  The disciples were demoralized on Good Friday, bewildered on Easter Sunday…..yet just a few weeks later, we see them bold and courageously proclaiming and explaining Christ’s resurrection.  Such a transformation can only be attributed to Jesus’ historical resurrection from the dead.

The disciples were eager to report the historical facts of Jesus and His resurrection.  Absent the resurrection, there would be no Christianity. As F.F. Bruce said, “If Jesus had not risen from the dead, we probably would have never heard of him.”  The disciples don’t provide us with detailed evidence for the resurrection — they themselves are that evidence.

We can make three observations:

1. The resurrection is historical.

Christianity is a historical faith. It is based on actual events.  There was a tactile element; the disciples saw and touched the risen Lord.  When Peter preached in Acts 2, he did not hold back.  He said “as you yourself knows” (vs. 22-23).  Later, when Paul spoke of the resurrection (I Cor. 15), he noted that many of the witnesses were still living.  It was as if Paul were saying, “Go ahead and check this out  — verify it for yourself.” It would be as if I wrote a book about The Beatles making up some fantastical story about who they were and where they came from.  It would never fly.  There are plenty of people around who remember the Beatles.  They know that there were only four of them, and that now just two are left.

The Bible is either true or it is the most amazing falsehood ever spun.  And to believe the latter is to build one’s lives on despair.

[Aside:  The resurrection of Christ, and the believer’s union with Him, is why believers do not perish upon their death.  Their resurrection and eternal life are secured by their union with Christ, who conquered death.]

2.  The resurrection is rationale.

The Dawkins’ book, The God Delusion, does not interact at all with the resurrection of Jesus. Dawkins writes, “Jesus probably existed, but the idea that he rose from the dead is absurd.”  On what basis?  He gives none.

The resurrection is the center of Christianity, because it confirms:

A)  The reality of the fall and the decay which is pervasive in this world.  “The whole creation is groaning.”

B)  The reality of the immortality (life beyond the grave).

D)  The inevitability of our own resurrection.

3.  The resurrection is empirical.

It stands up to the test.  It truly fulfills man’s longing.  Men like Hemingway and Shakespeare wrote that life was a journey from “nothing to nothing.”  But the resurrection answers the cry for meaning.  For forgiveness, love, hope, God.

And this is the story that we are called upon to take to the world.  Take Sartre: “Here we are, all of us.  Eating and drinking for preserving our existence, and yet there is no reason for our existence.”

But C.S. Lewis wrote, “I believe in Christianity as I believe in the sun, not because I can see it, but because by it I see everything else.”

The symbol of Christianity is the triumphant Christ, risen and reigning.  And men and women can call out to Him and find Him to be a Savior and Friend.