Ministering to Soldiers: An Interview with Douglas Lee

Tabletalk: How did you become a Christian, and how were you called to pastoral ministry? 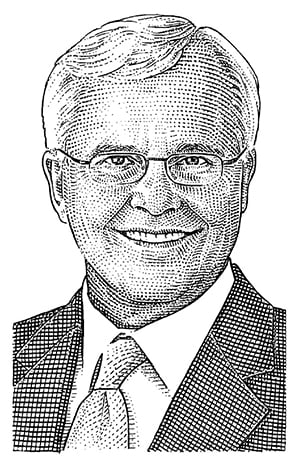 Douglas Lee: I was reared in a wonderful Christian home and professed Christ in church when I was about eight years old. Through many years of faithful Bible input, including a honeymoon at L’Abri Fellowship with Dr. Francis Schaeffer, my wife and I had a strong desire to serve the Lord. A providential journey to Covenant Theological Seminary eventually led to ordination and sixteen years of church ministry.

TT: How did you become involved in chaplain ministry?

DL: I wanted to serve my country and joined the Reserve Officers’ Training Corps in college only to be tossed out after two years. A routine physical revealed I had a congenital back defect. The military was taken off my career radar, and I thought no more of it. Eleven years later, however, as a pastor, I was looking for other ways to serve my community. A fellow pastor and Army Reserve chaplain suggested I explore local military service options. The Army National Guard had a chaplain opening in a unit near my church, and I applied for it. To my surprise, they accepted me, and I added “Army chaplain and commissioned officer in the U.S. Army” to my pastoral resume. A few years later, the Army asked me to serve on active duty, which I did for the next sixteen years of my professional career.

TT: What is the Presbyterian and Reformed Commission on Chaplains and Military Personnel (PRCC), and what are its specific functions?

DL: Most civilian and federal chaplain positions require an endorsement from a recognized faith group to ensure that the clergyman is properly credentialed. The PRCC is a seven-denomination commission of Reformed churches that authorizes me to “endorse” their men as chaplains. I like to tell people that I “catch, credential, care, and cover” chaplains.

TT: Why does the military have chaplains?

DL: Gen. George Washington authorized chaplains for the new army in 1775. He wrote a year later:

The Colonels or commanding officers of each regiment are directed to procure Chaplains accordingly; persons of good Characters and exemplary lives—To see that all inferior officers and soldiers pay them a suitable respect and attend carefully upon religious exercises. The blessing and protection of Heaven are at all times necessary but especially so in times of public distress and danger—The General hopes and trusts, that every officer and man, will endeavor so to live, and act, as becomes a Christian Soldier defending the dearest Rights and Liberties of his country. (George Washington, to Maj. Gen. Artemas Ward, July 9, 1776)

TT: What are the major duties that chaplains perform?

DL: Chaplains’ duties can be summarized in two phrases: they “bring God to man and man to God,” and they “nurture the living, care for the wounded, and honor the fallen.”

Essentially, chaplains exist primarily to support the First Amendment’s clause that states, “Congress shall make no law respecting an establishment of religion or prohibiting the free exercise thereof.” Along these lines, a military chaplain either “provides” or “performs” religious support. He “provides” rooms, heat, air conditioning, books, musical instruments, etc., for any troop that requests such support.

But a chaplain is not required to perform ecclesiastical duties that do not conform to his faith tenets. When he does perform religious duties such as preaching, teaching, praying, counseling, advising, and leading worship, he does so with liberty according to the tenets held by his endorsing group.

TT: What military restrictions on religious speech make it difficult for Christian chaplains to perform their duties?

DL: There are very few restrictions. However, a chaplain must understand he is serving in a religiously diverse setting. He might work on a staff with a rabbi, imam, Roman Catholic priest, or even a Protestant minister with different theological views. These chaplains must work together to ensure the free exercise rights of all the troops.

TT: When, if ever, are chaplains free to evangelize?

DL: Chaplains are clearly free to evangelize in a religious setting, such as a chapel service, Bible study, Christian prayer breakfast, or whenever a soldier seeks him out for spiritual guidance. As always, a good chaplain seeks the Spirit’s help to ascertain when to evangelize and what to say.

TT: What protections do Christian chaplains enjoy in the military that help to facilitate gospel ministry?

DL: The First Amendment is crucial. It provides a covering of religious protection over the chaplain. For decades, U.S. courts have affirmed the religious and free-speech rights of chaplains and all military personnel. The free-exercise rights of military personnel can be provided for only through an authorized chaplaincy.

Sec 533. Unless it could have an adverse impact on military readiness, unit cohesion, and good order and discipline, the Armed Forces shall accommodate individual expressions of belief of a member of the armed forces reflecting the sincerely held conscience, moral principles, or religious beliefs of the member and, in so far as practicable, may not use such expressions of belief as the basis of any adverse personnel action, discrimination, or denial of promotion, schooling, training, or assignment.

There are current forces at work that would love to see chaplains muzzled and even forced out of the military and civilian settings. Ultimately, however, chaplains enjoy the sure promises of God such as “He alone is my rock and my salvation, my fortress; I shall not be greatly shaken” (Ps. 62:2).

TT: Are Christian chaplains required to perform same-sex marriage ceremonies? How do chaplains remain faithful to the biblical teaching on marriage while also serving all military personnel, including those who believe homosexuality is not a sin?

DL: Chaplains cannot be forced to minister in any way that violates their faith tenets. They are very aware of the vows they have taken to “be zealous and faithful in maintaining the truths of the gospel” (as the PCA’s Book of Church Order says). They gain strength and boldness by reflecting on their calling, spending time in the Word and prayer, seeking like-minded fellowship, and taking every opportunity to share Christ as God opens doors. Chaplains know they serve in an environment much like what’s described in the book of Acts. They will say that though the world, the flesh, and the devil are active, opportunities abound for vital Christian ministry.

TT: How can civilians support our military chaplains?

DL: Pray. Ask your church to adopt a chaplain as part of its missions effort. Subscribe to the PRCC Guardian, a four-month prayer guide with chaplain prayer requests from the front lines of ministry. If you live near a military base, invite a chaplain family over for dinner. You can also support the PRCC financially so that the PRCC team can personally visit and provide resources for our chaplains.

TT: How is serving as a chaplain different than serving in a church? How is it similar?

DL: Chaplains do everything a pastor does. They preach, teach, evangelize, counsel, advise, manage, visit, sympathize with, and equip the saints. However, chaplains do all this in a pluralistic setting, cooperating with many faiths to facilitate the free-exercise rights of the troops, yet without compromising.

TT: What counsel would you give a young man who wants to become a chaplain?

DL: I would ask a series of questions such as:

(1) Are you ready for a life of high adventure?

(3) Has God firmly called you to this rather than some other ministry?

(4) Are you a self-starter, go-getter, make-it-happen kind of guy?

(5) Can you handle change, deprivation, chaos, loneliness, moving regularly, along with incredible daily opportunities to lift up Christ?

(6) Are you physically fit?

(7) Would the church and presbytery support such a calling? Would others say you “have what it takes”?

TT: Is there a verse to which every chaplain must hold fast?

DL: Yes. Proverbs 16:9: “The heart of man plans his way, but the Lord establishes his steps.” This is my “sovereign surprise” verse because it reminds me that every day is full of surprises for a Christian. But when you add “chaplain” to the equation, the surprises really ramp up.

Chaplain (Brig. Gen.) Douglas E. Lee, U.S. Army (Ret.), is executive director of Presbyterian and Reformed Commission on Chaplains and Military Personnel (PRCC) and chaplain ministries director of Mission to North America (PCA). Chaplain Lee serves as the endorser for the seven denominations of the PRCC. His many awards include the Armed Forces Reserve Medal