Just How Beautiful Beauty Can Be: An Interview with Andrew Peterson

Tabletalk: Please describe your conversion briefly, and tell us how you got into writing music and literature. 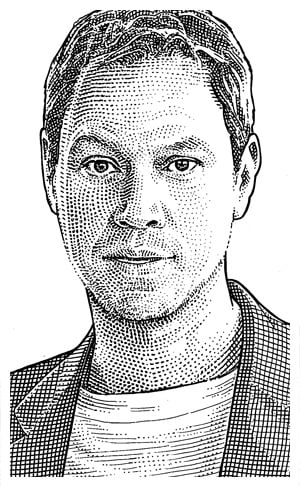 Andrew Peterson: I grew up in the church, the second son of a preacher man. That implies a lot, and most of what it implies is true. I was a rascal with a heart of coal, but I could flash a Sunday morning smile and impress the little old ladies in their flower hats. I was born in Illinois, but when I was seven our family moved to north Florida, also known as the “Deep South,” where your Christianity was defined by how guilty you felt or by what vices you didn’t have—or at least those vices you kept under control whenever the ladies with the flower hats were watching. When I was nine (I think), I walked the aisle and wept into my dad’s hip in response to his preacherly invitation. If you had asked me then what I was doing, I would’ve said that I wanted to get baptized because I was afraid of hell. In the simplest terms, I knew that I was broken, and Jesus was the only one who could fix me. I called myself a Christian from there on out, though my Christianity felt more like a nuisance during my extra-rascally high school years. But it just wouldn’t leave me alone. It wasn’t until I was nineteen, a year after graduation, that I encountered the music of Rich Mullins and began to understand how deeply broken I was, and more than that, how vast and beautiful is God’s grace.

All that time, music, art, and stories were what moved me the most. My older brother (also an author) and I were obsessed with books, movies, and bands, always looking for some emotional high that, at the time, only rock and roll or adventure stories could provoke. After I heard Mullins’ music, I woke to the real power of a finely crafted lyric; my eyes were open to just how beautiful beauty could be. At the center of it all was Jesus, spilling that light out from every pore, every gesture, every word. The rest of my life has been in service of the Source of all that light.

I remember telling the Lord back when I was nineteen that if I could ever make someone feel the way Rich’s music made me feel, then that’s what I wanted to use my music for. After I read the Narnia books to my boys, I wished the same thing for the stories I wrote. I should make the disclaimer that I realize my work is a far cry from Mullins or C.S. Lewis. This isn’t me being falsely humble. But if I can even get close to what those guys were doing with words and music and stories, if I can approach the foothills of those mountains, I’m wildly grateful.

TT: What is The Rabbit Room, and where did you get the idea for it?

AP: I had the pleasure of visiting Oxford, England, with my wife about six years ago. Like anyone who grew up reading about Aslan or Frodo, I felt like a schoolboy getting off the train in the heart of Oxford, where those stories were born. I visited Tolkien’s house; the Kilns, where Lewis and his brother lived; and finally, we stopped at the Eagle and Child, the famous pub where the Inklings sometimes gathered. That place is the Mecca for nerd pilgrims. The back room of the pub, where Lewis and Tolkien and their friends gathered, looks exactly like you would want it to. There’s a little fireplace, wood paneling on the walls, old Englishmen nursing pints of ale, and the ghosts of hobbits and fauns and dragons floating in the air. For a small-town American boy like me, the place was pulsing with magic.

Well, the room was called the Rabbit Room. According to the barkeep, at some point in the pub’s history the owner kept rabbits in that little room.

I came back to the States invigorated like never before to step into not just storytelling but storytelling in the context of community. It was remarkable to me that some of the most enduring works of literature by Christians grew out of friendships—not just academia or ambition. It was fellowship in the name of Christ that birthed the stories that populated my childhood imagination. So, we started the Rabbit Room—kind of like an online version of the back room of that pub. It’s not just a place for beardstroking elitism, and it’s not stuffy. At the same time, we’re shooting for excellence. Most of all, it’s a place for community, for friendship, and for the celebration of light and beauty and the Source of it all. As I said before, we may never get close to doing work as lasting as the Inklings’, but doggone it, that doesn’t let us off the hook.

TT: What inspired you to write the “Wingfeather Saga,” and how did you come up with “toothy cows”?

AP: I’ve wanted to write a good story since I was a kid. Having two little boys and reading to them almost every night gave me the impetus I needed to finally wrestle a book into the world. I sat down one night and drew a map, filled it with mountains and rivers and oceans, then towns and roads, and finally characters. The story grew up out of that map over the course of a few days. One of the best parts of the process for me was what Tolkien called “subcreation”—in the image of God, speaking a little imaginary world into being, experiencing in the smallest way His delight in making our world. That night as I drew the map, I was saying, in effect: “Let there be rivers. Let there be towns. Let there be a story.” At some point I got to say, “Let there be critters.” I had a ball inventing the monsters that crept and crawled in this little world—the most horrifying of which are, of course, the toothy cows. My mom is a cow fanatic. She has cow aprons, cow calendars, cow magnets, cow plates, cow wallpaper, and the list could go on. I’ve always been a little horrified of them, in the way that other folks are scared of clowns. So, I gave them fangs.

TT: How would you describe your style of writing, and which authors have most influenced it?

AP: I’m not sure how to describe my style of writing. I love writers like Annie Dillard (Pilgrim at Tinker Creek, Teaching a Stone to Talk), Frederick Buechner (Godric, Telling the Truth), Wendell Berry (Jayber Crow, Hannah Coulter, A Timbered Choir), Walter Wangerin, Jr. (The Book of the Dun Cow, Ragman and Other Cries of Faith). I’m afraid that too many fantasy writers are more into dragons and swords than they are sentences and words. The thing that made Lewis’ and Tolkien’s work stand the test of time was that they weren’t just nerds writing fantasy. They were scholars and lovers of literature writing great books. That’s what I’m shooting for, however far I fall short.

TT: What specific works of children’s literature would you recommend and why? Which works should be avoided?

AP: I, of course, enjoy the Narnia books and The Lord of the Rings, for very different reasons and in very different ways. I loved Bridge to Terabithia, by Katherine Patterson, pretty much anything by Kate DiCamillo, George MacDonald’s At the Back of the North Wind and The Princess and the Goblin. The Harry Potter series is a favorite in our home, as are the books of N.D. Wilson (100 Cupboards, The Dragon’s Tooth). One of my favorite books of all time is The Yearling by Marjorie Kinnan Rawlings. It’s always good to know a little about the author before letting your children read a book, and I’d prefer my children read books by Christians at first—that is, if the book is a good one. It’s a load of fun being, in essence, the curator of your children’s experience in literature and music, but it’s also a big responsibility. Not only do I not want them reading books that convey falsehoods, I don’t want them reading books that are poorly written. That’s what makes Lewis’ books such a gift. They tell the truth, and they’re beautifully written for the most part. Start there. Let them get a good sense of truth and excellence. After that, they’ll have a plumb line to measure the other stuff against. I’m probably more averse to a badly written book by a Christian than an excellent work by someone who isn’t.

TT: Can you describe one or two new books or albums that you are working on?

AP: I’ve just released a new studio album called Light for the Lost Boy (August 28). Most of the songs were written about growing up and the pain and joy that comes with it. I can’t wait for folks to hear it. It’s quite a bit different in concept and production than anything I’ve ever done, so I’m curious to see what the reaction will be. And now that the new record is in the can, I’m digging out my maps and nerd paraphernalia to get busy writing the final book in the Wingfeather Saga. It’s called The Warden and the Wolf King, and will be published in early 2013. That is, if I can meet my deadline. Finishing this tale is as intimidating as it is exciting. It’s a big story, and a lot has to happen in a few hundred pages. I really don’t want to disappoint all those sweet kids who come to my concerts with their copies of my books. They’re the real critics, and the ones whose hearts I want to reach.

Andrew Peterson is a singer, songwriter, and author. He has recorded and released numerous contemporary Christians songs, including Dancing in the Minefields, and is the founding member of the Square Peg Alliance, a collaboration of Christian singers and songwriters who write, tour, and perform together. He is the author of the Wingfeather Saga, a series of fantasy novels for young adults, and is currently working on the fourth and final volume of the series, The Warden and the Wolf King. Peterson is also the proprietor of the Rabbit Room, a community of songwriters, authors, and artists interested in storytelling, faith, and fellowship.