Tabletalk: How did you become a Christian?

Ravi Zacharias: I became a Christian while a teenager in India, the land of my birth. I had struggled with many issues—especially those of failure and disappointing my family. There was a series of events, but the culminating point came when I tried to take my own life. It was on that bed of suicide when a Bible was brought to me. I heard John 14 read to me, especially verse 19. Jesus said: “Because I live, you also will live.” In that crisis situation, I cried out to Jesus and received Him as my Lord and my Savior. That was the beginning. 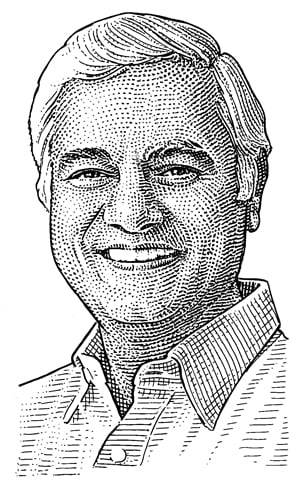 TT: How has God used your Indian upbringing in your ministry?

RZ: This whole global shift in “looking to the East” for answers has become a very real platform from which to address with understanding and experience what these worldviews teach and why more than ever the answers of Jesus Christ are relevant and true. India’s songs, India’s spiritual struggles, India’s brain drain as its brightest minds headed west have both economic and worldview reasons and implications. These provide ready soil for the gospel, probably as never before in history. Being Indian by birth and upbringing, and my ancestors coming from the highest caste of the Hindu priesthood, provides a story to tell. Audiences in the entertainment world and business or academic strata are all more open than before.

TT: What can RZIM offer to the church today?

RZ: RZIM is now based in ten countries, and our team of apologists and teachers in spiritual disciplines is doing evangelism in some of the world’s most hostile settings. As a result, people in churches are being energized and encouraged to get our material and use it well in their own efforts. We are also partnering with select churches to help train members. Our Oxford Centre for Christian Apologetics (OCCA) is now accredited with degree programs at Oxford University. In the long run it will produce a significant number of Christian apologists for the global scene. The strident attacks of the antitheists and other factors have made apologetics an indispensable need for our times.

TT: Do you have any current or upcoming projects that you want to tell us about?

RZ: My most recent book, Why Jesus: Rediscovering His Truth in an Age of Mass Marketed Spirituality, is a book that could meet a timely need. Also, pray for our entire team and families as we minister to political leaders and those who shape our culture. We have major university venues, and once again, I will speak at the UN Prayer breakfast this year. Amazingly, we receive numerous invitations from Islamic countries. We are seeing incredible responses. Some of the countries we cannot even name. Please pray for these meetings.

TT: How can we overcome the fears we have about preaching the gospel to followers of other religions?

RZ: It is very important to understand these other worldviews. Also, be a patient listener to someone of another faith. But you must know how to defend your own beliefs. If we cannot answer their genuine questions, we will “confirm” in their minds what they are often brainwashed into believing: that Christianity is intellectually flawed. This is what they are told. One doesn’t need to have all the answers, but one should know where they are found.

TT: Why is it so difficult to evangelize Muslims and what can we do about it?

RZ: It is very difficult to reach the Muslim community. In countries where the youth are fed up with having Islam forced down their throats, the powers in control reign over them with threats and terror. With many Muslims, there are two brutal facts. First, you simply cannot criticize their beliefs or their Qur’an without the fear of inflaming or inciting violence. Second, many times one cannot even reason with a Muslim. That is a fact.

So, the best hope is to win them through patient friendship and sharing the love of Jesus. That is the winning truth because love is a rare commodity in the Islamic faith. Almost all of the people who have come to faith from a Muslim background will say it was the love of Christ that attracted them, or else, in an incredible way, that God reached them through visions and dreams. It seems to me that when human powers block the message, God is able to scale their walls.

But it is critical when they come this way that they be taught and definitely discipled and helped in their apologetics to answer their families’ or friends’ questions. Ultimately, it is the Word of God that they will need, not just an experience that can be easily misused or abused.

TT: How do we equip young people to remain committed to Christ in a secular and non-Christian world?

RZ: The Bible reminds us to guard our doctrine and our conduct. Our youth know firsthand what the world has to offer. They need to be reached at a younger age because of the world of the Internet that ravages young minds sooner than ever before. Building their faith is not a prime strength in our churches today. We seem to think that we need to entertain them into the church. But what you win them with is often what you win them to.

They can see through a hollow faith in a hurry. Their minds are hungry for coherence and meaning. They long to think things through. They long to know why the gospel is both true and exclusive. None of these issues are often addressed within their own reach. I believe this is the most serious crisis of our church-going youth today. Their faith is more a longing than a fulfillment. We have a special burden for the youth. We will keep at it as we try to reach them. It’s a tough world for the young.

TT: What are three books that every Christian should read?

RZ: I would prefer to name authors. Authors such as C.S. Lewis, John Piper, Tim Keller, yes, and my dear friend R.C. Sproul. But there are many more. One of the greatest books ever written is The Pilgrim’s Progress by John Bunyan. For devotional studies, Oswald Chambers, and one of my favorites, G. Campbell Morgan, are great choices. We also have a bibliography on our website. Sorry, that’s more than three.

TT: What are the two most important ministry lessons you have learned in the past decade?

RZ: The hardest lessons I’ve learned are, one, how important it is to have the right people around you, and two, to learn to face criticism and opposition (oftentimes from those who should be more understanding) without allowing it to sidetrack you from your closeness to the Lord and His call. When you’re doing very little, nobody will bother you. But when you are making an impact, the Enemy of our souls finds ready emissaries to take aim at you. It goes with the calling. Keep close to the Lord and don’t let the critics dent your calling that a gracious and sovereign God has shaped.

So, as tough as the battle is, it is true for everyone called to be on the front lines. Our calling, to use a war metaphor, is that of “special ops.” It is fraught with dangers but vital for the conquering of the hearts of men and women around the world. To that end, God has immensely blessed the work of RZIM, now in its twenty- seventh year. I am most grateful for all the opportunities and blessings we have enjoyed. We have seen some of the most stubborn people come to Christ. That makes it all worth it. One more thing, knowing there are ministries such as Ligonier and many other fine ones, is reassuring. Even though the challenges are great, God is doing great things around the world.

Ravi Zacharias is the president of Ravi Zacharias International Ministries, an organization with offices in Canada, India, Singapore, the United Kingdom, the United Arab Emirates, and the United States. He is internationally known as a Christian apologist and has addressed thousands of people worldwide, including students and professors from numerous colleges and universities. Dr. Zacharias is the host of a weekly radio program, Let My People Think, and serves as senior research fellow at Wycliffe Hall, Oxford University. Among his many books are Can Man Live Without God?, Deliver Us from Evil, Walking From East to West, and Why Jesus?: Rediscovering His Truth in an Age of Mass Marketed Spirituality.