The Development of the Bible: An Interview with Michael Kruger

Tabletalk: As president of a Reformed seminary, what do you consider to be the greatest spiritual challenges that future pastors face in the United States and in the world? How can they prepare for those challenges? 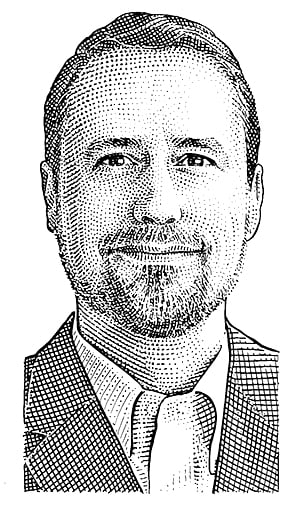 Michael Kruger: In prior generations, pastors have been repeatedly told that theology and doctrine don’t really matter and that they should just focus on running their ministries and shepherding the flock. However, the last few years of decline in America have shown that our theological convictions really do matter. The only pastors (and churches) who have been able to withstand the cultural onslaught regarding issues such as homosexuality are those that are grounded in the authority of Scripture and the truth of biblical teachings on marriage and sexuality. So, the greatest challenge for pastors will be whether they will stand firm on the teachings of the Bible despite the fact that they are ridiculed by our culture. In order to prepare for those challenges, pastors need to (a) recommit themselves to the truth of Scripture, (b) become serious students of Scripture themselves, and (c) boldly preach the Scriptures to their congregations.

I would also add that pastors will not just be ridiculed by the world, but they will be increasingly ridiculed by their own congregations. Pastors will find themselves in a situation where many members of their congregation openly disagree with them about the Bible’s teaching on key cultural issues. Thus, there will be an ever-growing gap between the position of the pastor/session and the position of some portion of the congregation—and that is the kind of situation that can lead to infighting and schism. To address this challenge, pastors have to make sure that their own people are properly instructed, trained, and persuaded about these key cultural issues. We cannot just assume they agree with us. As we reach out to the culture with the truth of Scripture, we cannot overlook our own congregations.

TT: What wisdom would you give to a theological student who is struggling to connect his theological knowledge with his heart?

MK: The first thing to realize is that theological knowledge and the heart are not opposed to each other. We must avoid the idea that we have to choose between the two. Solid, biblical truth encourages and uplifts the heart. Second, the student needs to realize that the study of theology is always personal—it applies to them, too. As soon as we begin to see theological study as an abstract hobby, and not something that we apply to our own lives, we will find ourselves becoming cold and distant to the things of God. And third, students must maintain a vibrant and consistent devotional life. The intimacy of daily communion with God is an inoculation against growing cold and hard-hearted during one’s time in seminary.

TT: What is the biblical canon? Why is it important for Christians to understand issues related to the canon of the Bible?

MK: The term canon simply refers to the collection of books that Christians regard as divinely inspired Scripture. Because the Bible is not just one book but is composed of sixty-six smaller books, questions always arise about whether we have the right books. What if some were left out? What if wrong ones were added?

These challenges are not just ones that scholars face. People in the pew regularly face them as well. Mainstream media outlets are regularly bringing these issues up as they challenge the integrity of the Bible. For example, on December 23, 2014, Newsweek published a cover story titled “The Bible: So Misunderstood It’s a Sin.” This piece attacked the integrity of the Bible just days before Christmas—and was read by millions of people. Thus, the issue of canon is central to our belief in biblical authority. Christians (and especially pastors) have to have answers to these questions.

TT: How did you become interested in questions of the biblical canon, inspiration, and inerrancy?

MK: When I was an undergraduate at the University of North Carolina at Chapel Hill, I took a New Testament introduction class with Bart Ehrman, a well-known critic of biblical Christianity. Ehrman piqued my interest in issues related to the development of the canon and the transmission of the New Testament text. It was a very challenging class for me as a young believer, but God used it to lead me to further study in these important areas. In Ph.D. studies, I had the privilege of studying under Larry W. Hurtado at the University of Edinburgh, one of the leading textual critics in the world today. There, I continued to dive deeper into these issues and published my doctoral thesis on the apocryphal gospel fragment P.Oxy. 840.

TT: What is your response to a person who says, “The early church decided which books made it into the Bible”?

MK: I would say that this is partially true. The early church did recognize which books were from God, and then affirmed which books belonged in the canon. However, the early church did not “decide” the shape of the canon in the sense that it made books canonical. Books are canonical because they are given by God to His church. The church simply responds to what God has already done.

Moreover, the historical evidence does not indicate that the church somehow “decided” which books were in the Bible. Long before there were any church councils about the issue, the core books of the canon were already in place and functioning as Scripture. For example, when it comes to the New Testament, we have a core canon (approximately twenty-one out of twenty-seven books) that was well established by the middle of the second century. That is long before the church ever made formal statements about such things.

TT: What should Christians make of the fact that there was a dispute regarding whether some of the books of the New Testament were canonical?

MK: Christians are often bothered or surprised when they learn that some Christians disagreed about some canonical books. But this really should not surprise us. When it comes to important spiritual matters, inevitably there is some opposition to the truth. Even when Jesus came to Israel, there was disagreement about who He was.

Even more than this, it is important to remember that natural historical processes led to some disagreements. Given that books were written by different authors in different locations at different times, it is inevitable that some groups would receive those books before others. If God decided to give His books in normal historical circumstances—and not dropped from heaven on golden tablets—such disagreements would be inevitable. The key issue is that once the dust had settled, Christians were remarkably unified about which books belonged in the canon and which did not.

TT: What are the autographs of the New Testament, and how does our doctrine of inerrancy relate to them?

MK: The “autographs” are just a reference to the original manuscripts penned by the inspired authors of the Bible. When we say that the Bible is inerrant, we are careful to clarify that this pertains to the wording of the original autographs. The reason for this is obvious: some manuscripts might have been poorly copied and contained changes and/or mistakes. Such changes obviously are not part of the inspired text. Even though we don’t possess the autographs today, we have so many good copies that we can reconstruct the original text with a very high degree of confidence.

TT: What is the difference between the New Testament Gospels and other “gospel” documents such as the Gospel of Thomas?

MK: Books like the Gospel of Thomas are often used to challenge the integrity of the New Testament canon. But they really do not pose a serious threat to its integrity. First of all, the apocryphal gospels, including Thomas, were all written in the second century or later. Thus, none of them could possibly be composed by an actual Apostle (or companion of an Apostle). Second, these apocryphal gospels never had the level of acceptance or popularity as the canonical ones. They were always on the fringe and never serious contenders for a place in the canon.

TT: How can Christians be sure that the Bible we have is the one that God wanted us to have?

MK: There are lots of reasons to be confident that the books in our Bibles are the ones God intended. First, Christians have argued that inspired books contain certain “divine qualities” that set them apart from other books. Such qualities include beauty and excellency, power and efficacy, and unity and harmony. Because of the activity of the Holy Spirit, we can be confident that individual Christians and the church as a whole would have been able to recognize these qualities.

Second, we have excellent historical evidence that shows that these books were recognized early and widely by God’s people. As noted above, the New Testament books were well established even by the second century. Thus, it seems that God’s people were quite able to recognize which books were from God, and they did so at a very early time.

And, on top of all of this, Christians put their trust in the sovereignty and providence of God over such matters. If God desired that His church possess the proper books, we can be confident that He would sovereignly bring it about.

Michael J. Kruger is president and Samuel C. Patterson Professor of New Testament and Early Christianity at Reformed Theological Seminary in Charlotte, N.C. Dr. Kruger is an ordained minister in the PCA and serves as associate pastor at Uptown PCA. His many books include The Question of Canon and Canon Revisited.