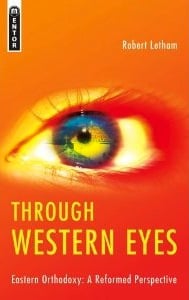 According to estimates provided by Robert Letham, there are somewhere in the neighborhood of 180 million Eastern Orthodox believers in the world today.  Until recently, Protestants in the West had little contact with the Eastern Church and, as a consequence, little knowledge about it.  That is no longer the case.  Immigration of people from the East into Western countries, continued urbanization, and Internet communication have made this church much more visible to a larger number of people.  Prominent conversions have also put Eastern Orthodoxy on the map for many Western Christians, Reformed and otherwise.  One of the most notable was the 1996 conversion of the noted Lutheran church historian Jaroslav Pelikan.  A decade earlier in 1987, Peter Gillquist, a former evangelist for Campus Crusade, led more than 2,000 evangelicals into the Orthodox Church.  The 1990 conversion of Frank Schaeffer, son of Francis Schaeffer, to Eastern Orthodoxy put the Orthodox Church in the Reformed spotlight for a while.  Pelikan, Gillquist, and Schaeffer have not been alone, as many Western Christians, have found Eastern Orthodoxy to be an attractive alternative to the trivial novelties that pass as worship in many contemporary churches.  It is important, therefore, for Reformed Christians to have some understanding of the history, doctrine, and practice of the Eastern Orthodox Church.

My own introduction to Eastern Orthodoxy came a decade or so ago when I was studying the relationship between Scripture and tradition in the history of the Church.  I was somewhat familiar with the debates on the subject between Protestants and Roman Catholics, but I was not familiar with the Eastern Orthodox view of the matter.  In order to become more familiar, I read works by Kallistos Ware, John Meyendorff, Georges Florovsky, and others, and these were instructive.  However, because the historical and philosophical context of Eastern Orthodoxy is so different from that of the Western churches, these works can be difficult.  It is helpful for most Western readers to have a guide.  There have been books written on the subject of Eastern Orthodoxy from a Western perspective that are intended as such a guide, but to the best of my knowledge there has not, until now, been a full length work looking at the Orthodox Church from a specifically Reformed perspective.  This gap has now been filled by Robert Letham in his book Through Western Eyes: Eastern Orthodoxy: A Reformed Perspective (Mentor, 2007).

Dr. Letham, who was for many years an OPC pastor in Delaware, is now a Lecturer in Systematic and Historical Theology at Wales Evangelical School of Theology.  His previous publications include The Lord’s Supper, and The Holy Trinity.  His new book, Through Western Eyes, is divided into three parts.  In Part One, Letham traces the history of the Eastern Church, paying particular attention in the first three chapters to the doctrinal controversies that shaped its theology and worship.  He looks closely at the doctrine of the Trinity set forth at Nicea and Constantinople and the doctrine of Christ set forth at Chalcedon.  Chapter four is then devoted to some of the major church fathers of the East.  Letham explains who they were and why they remain significant in the Eastern Church to this day.  Much of the content of the first four chapters will be familiar to those who have studied church history to any extent.  Chapter five, however, will be new to many.  In this chapter, Letham traces the history of the Eastern Church from the seventh century to the present day.  He discusses the church’s conflict with Islam, the schism with the Western church, the missionary endeavors of the Orthodox churches, the rise of the Orthodox Church in Russia, and recent persecution and suffering under communism.

Part Two is devoted to the theology of the Eastern Orthodox Church.  In these five chapters, Letham discusses the Orthodox understanding of prayers and icons, Scripture and tradition, the Church and sacraments, the Trinity, and salvation.  In Part Three, Letham turns his attention to an evaluation of Orthodoxy from a Reformed perspective.  He looks at what the two have in common, where he believes the Reformed could learn from the Orthodox, misunderstandings and misrepresentations that exist on both sides, and finally genuine and serious areas of disagreement.  Letham believes there are four areas in which the Reformed can stand to learn from the Orthodox.  In the first place, for the Orthodox, the doctrine of the Trinity is a vital part of belief and worship, not a mathematical riddle.  The Western churches, according to Letham, could learn something from this.  Second, Letham believes the Reformed could learn from Orthodoxy’s emphasis “on the key unions of the Christian faith – the union of the three persons in God, the union of deity and humanity in Christ, the union of Christ and the church, the union of the Holy Spirit with – or in – the saints” (p. 273).  He believes these themes are underemphasized by the Reformed.  Third, Letham argues that the legacy of the Enlightenment has caused theology in the West, unlike theology in the East, to become a detached academic endeavor separated from the life of the church.  Finally, on a related point, Letham argues that the Reformed could learn from the Orthodox the importance of uniting theology with churchly piety.

In terms of areas of agreement between the Reformed and the Orthodox, Letham argues that there are several.  He argues that aside from the filioque, there is agreement on the essentials regarding the Trinity and the Person of Christ.  In other words, there is agreement regarding the Councils of Nicea and Chalcedon.  He argues that while there are differences, there is also some substantial agreement regarding the authority of the Bible, sin, the fall, Christ’s death and resurrection, and the gift of the Holy Spirit.  Letham is careful to note, however, that there are differences regarding the doctrine of original sin and the atonement.  Letham also points out the areas of agreement on the doctrine of justification, a doctrine that was never at the heart of any controversy in the East as it was in the West in the sixteenth century.

Letham continues by describing those areas he believes are points of misunderstanding between the Orthodox and the Reformed.  He rightly notes that in order to properly evaluate a doctrine or practice, one must first understand it accurately.  He believes that the Reformed have often misunderstood what the Orthodox say regarding icons, prayer to the saints, and the matter of Scripture and tradition.  On the other hand, the Orthodox misunderstand the Reformed doctrine of predestination, the Eucharist, and the authority of the church.  Finally, Letham lists five areas of Orthodox doctrine and practice that are of major concern to Reformed Christians.  First, as much as Scripture saturates the Orthodox liturgy, the Orthodox still downplay the preaching of the Word.  In doing so, they neglect a major part of their own claimed tradition since some of the greatest preachers in the ancient church were from the East (e.g. Chrysostom, Gregory Nazianzen).  Second, there is serious disagreement regarding the authority of Scripture.  Reformed Christians understand the Scripture to be our final authority for faith and practice.  The Orthodox see the Scripture as one factor among many to be considered.  Third, the Orthodox doctrine of the Trinity has been negatively impacted by the doctrine of Gregory Palamas.  His doctrine, as Letham explains, ultimately leads to agnosticism concerning God.  Fourth, there is serious disagreement concerning the veneration of Mary and the saints.  Finally, and most seriously, there are disagreements concerning soteriology.  Orthodoxy, as Letham, explains, is similar in many ways to Arminianism (p. 285).  Therefore, many of the disagreements the Reformed have with Arminians, they will also have with the Orthodox.

Through Western Eyes is a helpful book for any Reformed believer interested in learning more about Eastern Orthodoxy.  I would suggest that it would also be helpful to any believers within Eastern Orthodoxy who are interested in learning more about Reformed doctrine and practice.  Letham takes great pains to present the teaching and practice of the Orthodox accurately.  There are no straw men here.  Letham is also honest in pointing out where he believes the Reformed could learn something from the Orthodox, and where the Orthodox could learn from the Reformed, but he does not descend into thoughtless sentimentality and brush over the real and significant differences between the two communions.  He points out those differences and explains the Reformed perspective on the issues.  If there is any weakness in the book, it is that Letham may underestimate some of these differences.  At times it seems that he sees more points of agreement between the Orthodox and Reformed than there actually are.  As simply one example, although Letham does note that the Orthodox and Reformed differ on the doctrine of original sin, he states that the Orthodox and the Reformed are in general agreement on sin and the fall (p. 277).  Considering how significant the doctrine of original sin is to Reformed theology, and considering Orthodoxy’s rejection of the Augustinian doctrine, it is difficult to understand how the fall could be considered an area of general agreement.  Again, this is not to call into question the overall usefulness of the book.  It is simply to suggest to readers who are interested in the subject that they look at primary sources as well.