The State of Theology: Take It or Leave It

Before we get to the survey results, consider a few other questions we asked. We asked if the Bible has the authority to tell me what to do. This gets at one of the key issues of the modern age. Are we in the twenty-first century going to submit to a book that stretches back from the centuries BC and the first century AD? Will we submit to an ancient book? Less than half, 49%, say yes. That leaves slightly over half of Americans unwilling to submit. Two out of ten Americans rather strongly deny the Bible’s authority.

If we ask a more general question we get a better response. We asked if God has authority over people because he created human beings. We found that 61% agree.

So why the drop down when it comes to the Bible? It’s one thing to say God has authority. It’s another thing to get specific about what God has to say and what is specifically authoritative. The idea of something that tells me what to do in the particulars becomes too strong of a proposition. 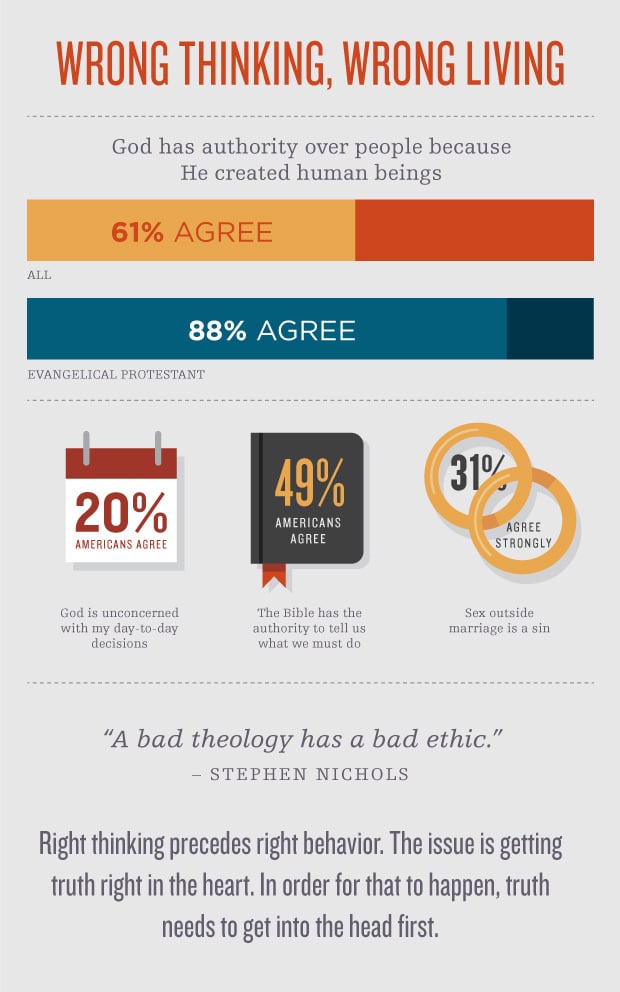 And so we circle back to the question: Is sex outside of marriage a sin? 48% say it is. Over half are not willing to say so. And what about American evangelicals? What do they say? We should expect to see close to 100% agreement on this question. This is not a gray area. Scripture is rather clear that marriage is the exclusive domain for sex. Sex outside of marriage is a sin. We don’t see close to 100%. We see a quarter of evangelical Christians unwilling to agree with the plain teaching of the Bible on ethics.

All that is to say, a bad theology means a bad ethic.

God has not made us as brains on a stick. We are not Spock-like creatures, with brains and reason only. Anyone who thinks Christian living or discipleship is exclusively about right thinking is wrong. Anyone who thinks the end of all living is merely right theology is wrong. Living matters. What we do matters. Our ethic matters. But our ethic and our lifestyle flow from our doctrine, from our right thinking.

It’s always helpful to gain some wisdom from the past. J. Gresham Machen was battling bad theology in American culture and in the American church in the early decades of the 1900s. He was even battling bad theology in the very seminary where he taught. These battles led him to write his classic text, Christianity & Liberalism, a book full of wisdom. One such sage observation is this: “We do not mean that if doctrine is sound it makes no difference about life. On the contrary, it makes all the difference in the world.” He then thunders, “If our doctrine be true, and our lives be wrong, how terrible is our sin!”

Both a good theology and a good ethic, both doctrine and lifestyle, constitute faithful Christianity. Like ham and eggs.

We, too, have our battles with bad theology and bad ethics in American culture and in American Christianity. Like Machen in his day, we need to take the same courageous stand in our day. We cannot afford to adopt a take it or leave it attitude when it comes to thinking about and obeying God’s Word. We must take it.