The State of Theology: The Good Book

This represents the current number of Bibles per American household, according to a survey by the American Bible Society. Of course, many households have more; some have less. But that same survey reports that nearly 9 in 10 of every American household has at least one Bible.

I remember seeing a list of books that every well-stocked and well-respected home library should have. Next to the writings of Shakespeare, comes the standard list of classics. Then follows the biographies and autobiographies. Next, poetry, and don’t forget philosophy. You also need a few good reference books, especially a good dictionary. Large folio art and architecture books are sure to impress. And, of course, no self-respecting home library would be without a Bible, or two. Or, as the case may be, 4.7.

A crucial question, though, remains: Are these Bibles being read?

In his rather short second inaugural address, Abraham Lincoln had rather somber words. This was not a time of celebration, as most inaugurations are. The nation was divided and at war. The speech is full of biblical citations and biblical allusions. Lincoln can barely go three or four sentences before he pulls from Scripture. I’m not at all implying or even trying to imply that Lincoln was a Christian.

To paraphrase Keith Green, quoting Scripture doesn’t make you a Christian anymore than going to McDonald’s makes you a hamburger.

Therein lies the difference. We have Bibles. We have lots of Bibles. But we aren’t reading them anymore. 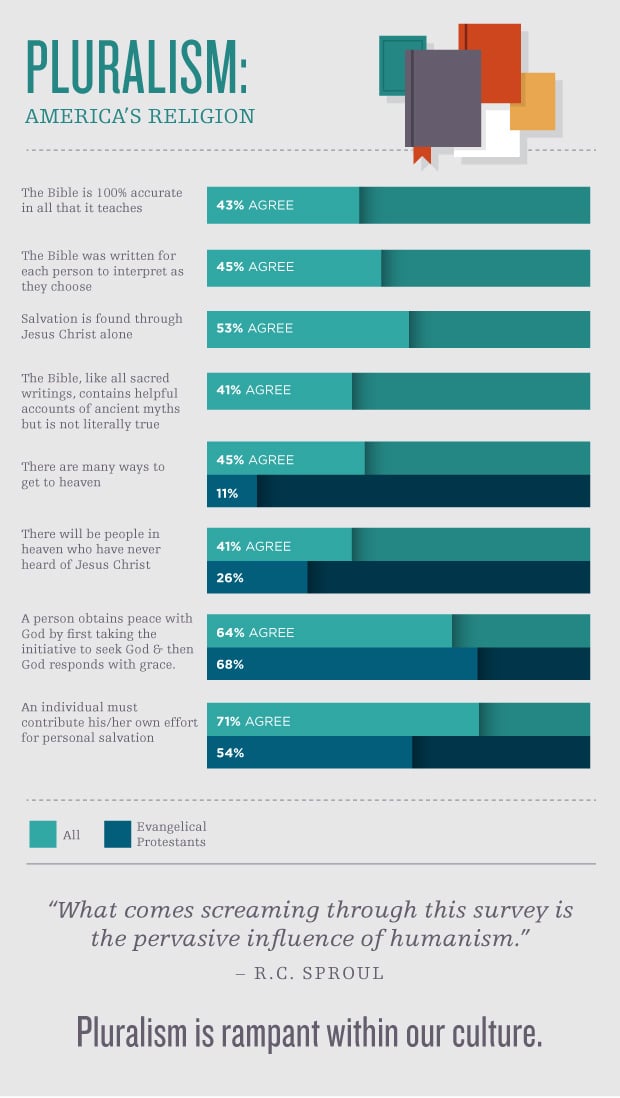 A second crucial question, however, remains even still: What is the attitude toward the Bible? To answer this question, Ligonier partnered with Lifeway research to survey American attitudes toward theology. You can find the full survey results at TheStateOfTheology.com. A handful of questions were asked about the Bible in particular.

Here’s what Americans think. Less than half, only 47%, think that God is the author of Scripture. About the same amount think Scripture is true. And the same amount, 48%, agree with the statement, “The Bible alone is the written word of God.”

If we press even further we find that only 43% agree that the Bible is 100% accurate in all that it teaches. More disagree with that statement than agree. To be exact, 46% disagree.

The Bible has had and continues to have a place, quite literally, in American homes. But the Bible does not have the place it deserves.

C. S. Lewis made the memorable observation that Jesus is either Lord, liar, or lunatic. One thing He can’t be, though, is a good man or a good a teacher. He’s either delusional or deceptive; or, He is exactly who He claims to be.

The same is true of Scripture. It’s either God’s authoritative and true Word, or it is a dangerously deceptive book, or it is a book of tales by deluded madmen. It cannot be one thing, however. It cannot be a good book.

To a certain extent, it is good that the Bible has a place in American culture. The Bible provides a solid ethical base for a civil society. The Bible is the means by which God’s grand plan of redemption is revealed. The Bible is powerful and life-changing. Its presence in homes should be encouraged and applauded.

It was said of Calvin’s Geneva that as domestic issues reached the ruling body of the City, known as the Consistory, one of the first questions asked was if there was a Bible in the home. If not, the first thing the Consistory did was to order that a Bible be secured. For those without means, the Consistory readily provided one.

Exposure to God’s Word is a good thing. But good things can become problematic things. So it is with the Bible in America.

The results from these questions in The State of Theology survey reveal that American culture has reached a tipping point. Less than half consider the Bible to be the Word of God and, therefore true. This is a harbinger of things to come. This is a loss of a moral compass. This is a continuation of a slide towards a post-Christian culture. This is sobering.

American Christians have Bibles. We tend to have even more than 4.7. Do we read them? Do we cling to our Bibles as the authoritative and true Word of God to us? Do we obey and follow what we read? The answers to these questions make all the difference in the world.