One or Two by Peter Jones 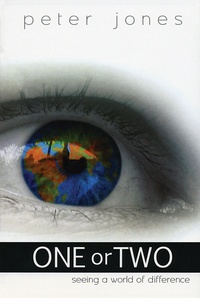 I love paradigms, grids and excel spreadsheets; they have such a wonderful way of providing a means of systematizing information and making it understandable, accessible. Over the years I have tried to provide paradigms to categorize worldviews (or religions). I have employed the work of others and have modified some to try to simplify for my students what the various worldviews have in common and what makes them unique.

The most generalized templates for worldviews typically include between three to eight categories. These categories are not derived from Scriptural exegesis, they are merely tools designed to help us comprehend teachings. But now Dr. Peter Jones (Scholar in Residence and Adjunct Professor at Westminster Seminary in California) has distilled a model with only two classes of worldviews and one of the beauties of this distillation is that it is biblically derived rather than pragmatically constructed.

The two categories are boldly printed on the front of his book, One or Two: Seeing a World of Difference. Simply stated, ‘One’ refers to the belief that (a la Sagan) the universe is all there is and all there ever will be. Answers should not, indeed cannot, be sought outside the constraints of creation because there is nothing outside of creation. ‘Two’ refers to the Christian worldview which teaches that there is a personal, transcendent God that created the universe and providentially sustains it, but is not to be identified with it.

The two options are wonderfully explained and contrasted in this book and the exegetical support for this thesis comes from Paul’s writings in Romans 1. Dr. Jones culls many helpful insights in his methodical examination of this chapter, summarizing for the reader three areas in which we see the tide of monism (the ‘One’) rising in our culture: “theology (what we believe about God), spirituality (how we worship) and behavior (specifically, how we live our sexuality).”

These three subjects are further dissected from both from a monistic (One) viewpoint as well as from a Christian (Two) perspective and contrasted with one another in a very helpful, readable, and well supported (Scripturally and otherwise) manner.

The book is full of modern day examples of monism in the thinking, activities, institutions, books and media of our day, so if anyone thinks that Dr. Jones is merely tilting his lance at philosophical windmills he will have to contend with the sheer volume of evidence to the contrary.

Perhaps by this point you are wondering how ALL religions of the world can fit into this paradigm? Dr. Jones presupposition is based on Romans 1:24-25 where Paul writes: “Therefore God also gave them up to uncleanness, in the lusts of their hearts, to dishonor their bodies among themselves, who exchanged the truth of God for the lie, and worshiped and served the creature rather than the Creator, who is blessed forever. Amen.” But the question is: “Is this a necessary consequence of suppression or just one possibility of it?” Jones would answer that it is the former, but this begs the question of how religions such as Islam, Judaism or the cults can be considered monistic.

Dr. Jones is not unaware of the question and addresses both Judaism and Islam in Chapter 6, albeit briefly. He writes, “Practically speaking, most Jews no longer believe in the Bible, for the god of rabbinic Judaism has become an impersonal force, driving many into forms of pagan spirituality that seek the “god” within. Regarding Islam, Dr. Jones points out that Allah swears by the sky, moon and stars and thus puts ‘himself’ on plane with them. (Contrast this with Hebrews 6:13: “For when God made a promise to Abraham, because He could swear by no one greater, He swore by Himself…”) Additionally, regarding both Islam and Judaism (and arguably the cults), Dr. Jones contends that any theistic system that is not Trinitarian cannot have a personal God and thus reduces ‘him’ to a force, a theme that runs rampant in monistic thought and writings.

Dr. Jones has been sounding the clarion call on monism for years. While the church has been fretting over the rise of materialism (a philosophy for little boys according to C.S. Lewis), its parent, monism, has been morphing and metastasizing all around us for decades. This should not surprise us, according to Dr. Jones, for 2 millennia ago the apostle Paul warned his readers that if you do not worship the Creator, you are doomed to worship the creature. If you reject Two, you choose One. Those are the options – there is no tertium quid.

This brings up one criticism of the book: there is no index. In a book that has so many concrete examples (formal names, events, etc.) an index is most helpful to make the book a reference source. Additionally, rather than the chapter title being printed on the top right pages, the most current subtitle in the text is provided; I found this more confusing than helpful as I had to return to the chapter title occasionally to be reminded of the overarching subject of that chapter.

Those without a philosophical background will still find this material readable and insightful. For those students entering college, One or Two is a must read if you want to understand the culture that will soon attempt to smother you. The end of the book contains a Q&A section that will further train and prepare the reader.

You can buy your copy of One or Two at the Ligonier store. To learn more about Dr. Peter Jones visit truthxchange.com.