Dr. Steven J. Lawson opened the conference with a dynamic message entitled “The Foolishness of Preaching” from the text I Cor. 1:18-25. Lawson is the senior pastor of Christ Fellowship Baptist Church in Mobile, Alabama. He serves on the board of directors of The Master’s College and Seminary and the ministerial board for Reformed Theological Seminary and teaches with Dr. John MacArthur at the Expositor’s Institute. In addition to his pulpit ministry, Dr. Lawson has written more than ten books, including Foundations of Grace, The Expository Genius of John Calvin, The Unwavering Resolve of Jonathan Edwards, and Famine in the Land: A Passionate Call to Expository Preaching.

The city of Corinth was fully immersed in the Greek culture. The “golden-tongued” orator was the celebrity of that day - above athletes and other accomplished individuals. Public speech was regarded as the highest form of entertainment. The orator was always trying to win the audience with his way of words.

So when Paul came to Corinth, they were sizing him up based on his abilities, eloquence, and even his size/physique. By Paul’s own admission, he was lacking in these regards. With regard to diction and sophistication, Paul simply did not meet their expectations.

But Paul saw himself in a different light. Paul saw himself as a herald, not a “golden-tongued orator.” Heralds were regularly commissioned by the Roman Empire to go into a marketplace and deliver messages assigned by public officials. Heralds were obedience oriented, not results oriented. A herald simply needed to be a faithful steward. The success of the herald was determined by substance and faithfulness, not through winning style points with his audience.

The herald is marked by a straightforward message. The success of the herald required a clear articulation of the message, regardless of the audience’s response.

Paul grounds his argument in the Old Testament (cf. Isaiah 29:14): “I will destroy the wisdom of the wise…” Paul then challenges the wise of his day to stand forward and present their wisdom and try to match the wisdom of God in the cross. All that the world would put forward is utterly mindless, Paul says. There is only one solution to the dilemma of our estrangement to God: the word of the cross. There is but one way of wisdom - the word of the cross.

Paul shows that the wisdom of the world and God’s wisdom are headed in opposite directions. The world through its wisdom did not come to know God. The only way to know the God of the universe is through His son. It pleased God that it should be this way. God’s heart was delighted to save those who believe.

HOW, THEN, IS ANYONE SAVED?

God makes His word effective by irresistibly calling men and women out of the world - they are summoned and drawn to faith by the message preached. The herald does not accomplish this. He merely speaks the truth. He then trusts in the Spirit of God to bring to Christ those who are appointed to believe.

It is the effectual call of God that determines those who are saved. And this is precisely the foolishness of preaching—the fact that it does not depend upon the preacher to eloquently persuade people into conversions. This reliance upon God is what makes it simultaneously foolishness to the world and the very wisdom of God.

All of us are the heralds. We are set apart - some to preach, others to teach. And we know that God the Holy Spirit always goes before us.  When the elect hear, they will believe. God himself will guarantee the success of the preaching — so that no man may boast before the Lord, and so that no flesh may glory in His presence (as if they themselves contributed). 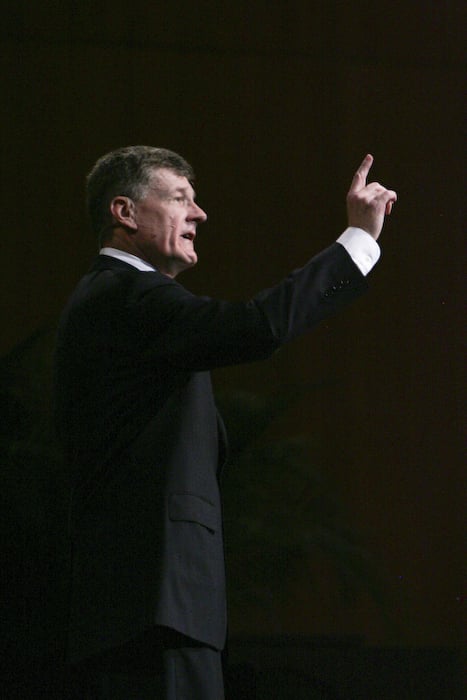