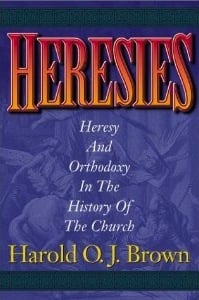 It is said that most religions of the world are religions of orthopraxy. That is, they are far more concerned with maintaining proper rituals and works than with the careful definition of what constitutes proper belief. In comparison, the historic Christian faith is far more concerned with orthodoxy, or right belief. Other faiths have simple creeds and elaborate ritual, but Biblical Christianity has an elaborate creed and simple ritual.

Over the centuries, Christians have taken the apostolic command to contend for the faith once delivered to the saints (Jude 1:3) quite seriously. Christian history is the history of doctrine, and of the struggle to keep it pure and Biblical. Heresies, by Harold O.J. Brown, tells the story of orthodox belief.

Brown’s book is an excellent overview of the history of Christian doctrine. Each chapter presents a heresy, a doctrine that would “undercut the very basis for Christian existence” (p. 2), and tells of the reaction against it by orthodox Christians. Long-time students of church history, as well as those just beginning to learn, will find the focus on the doctrines themselves extremely useful and informative.

But the book is not just a recapitulation of church history. Brown, a top-notch church historian, also offers commentary on events and beliefs. This commentary will be especially useful to those who are studying church history in a secular academic setting. Many non-Christian historians love to assert that the triumph of orthodoxy is due largely to political power and that a small minority of theologians imposed the creeds on vast numbers of Christians who held varying and opposing beliefs. Brown’s commentary and analysis render these assertions ludicrous. He points out that the very conception of heresy presupposes an orthodox body of belief that heresy opposes. After all, if there is no orthodox doctrine to begin with, there is no point for all the argument over it. Because orthodox doctrine was widely held in the early church, there was no need for its explicit definition until false teaching arose. Far from being an imposition from a minority of theologians, what we know as orthodoxy was accepted by the majority of Christians and was explicitly defined in various ecumenical creeds because of the threat of a few false teachers.

As Brown reminds us, the theory that those with the most political power imposed their ideas as orthodoxy is likewise untenable. While it is true that the state has been used in Christendom to enforce orthodoxy, this practice has by no means been consistent. For example, we have the doctrine of the Trinity today only because Athanasius stood up against Roman emperors who tried to deny the full deity of Christ.

Brown’s work is also a true gift to the church. One of the biggest problems in the church today is that most people are unaware of her history. Thus, it is quite easy for aberrant doctrines to be taught in many churches while the people remain unaware. Brown’s book can be a remedy for this. For example, many in the church claim special revelation from God about all sorts of issues. The result is doctrinal confusion and a separation of Christians into classes - those who possess said revelation and those who do not. We should not be dismayed about this, for earlier heretics taught the same thing. The Gnostics claimed to have special knowledge no others had. The Montanists claimed that God was communicating new special revelation to them. Those who would claim new revelation today are simply carrying on the tradition of these earlier heretics. The maxim “There are no new heresies” is vindicated time and again, and Brown’s work helps us to recognize that the heresies of yesterday become the heresies of today.

The Christian faith has always held a body of essential doctrines, those that must be believed in order for one to be saved. These have included doctrines such as the Trinity, the humanity of Christ, and original sin. These are truths that must be defended even unto death because of their necessity for our salvation. At the same time, the Christian faith has allowed disagreement on a number of more peripheral issues, including such things as the nature of the millennium, end-times chronology, the mode of baptism, etc. These are issues about which Christians may differ but still remain Christian.

Brown notes that when there is no room for disagreement on peripheral doctrines, there will be no room for the Holy Spirit to correct our understanding of the central ones. This is the problem he notes with the medieval Catholic Church, which made all of its teachings central to salvation. It thus became unable to recognize how far it had strayed from apostolic teaching. The church could not recognize the correction the Protestant Reformers offered because to disagree at any point was heresy and the church could tolerate no disagreement.

This is a point we all must remember. It is tempting for the church to become too sectarian and brand any disagreement a heresy. When this happens, we can become unable to recognize the correction of the Spirit through the Word. Brown’s writing and analysis remind the church that while we must be willing to die for the non-negotiables, we must also tolerate disagreements among sincere Christians on more peripheral matters. The information Brown offers on the doctrinal controversies in church history helps us to recognize which doctrines must be held without compromise.

Brown’s work also helps us to understand history critically. It is very tempting for Protestants to idealize certain individuals because of their importance in keeping the church true to the Scriptural Gospel. No individual is infallible, however; even the greatest saints had personal failings and doctrinal problems. Brown’s work reminds us of these and thereby encourages us to apply the principal of sola Scriptura even to our own heroes. We are reminded that it is not Martin Luther or John Calvin who is our final authority, even though they were great men of God. Rather, it is the Holy Scriptures that must be our final authority in all matters of faith and practice.

Another strength of Brown’s book is the respect that it shows for the creeds of Christendom. Because the Bible is such a large work with varied contents, it can be difficult to gain an understanding of the whole. Because of this, various church councils have produced creeds to concisely present the teachings of the whole of Scripture. Though these creeds are not infallible, they are absolutely important to maintaining orthodoxy. The best minds in the history of the church have not been able to improve upon such ecumenical statements as the Apostles’ Creed, the Nicene Creed, and the Creed of Chalcedon. They help the church understand where speculation about certain doctrines must stop, and in so doing, allow us to confess all the Bible says instead of just a portion. Brown demonstrates that one of the main reasons for the present doctrinal confusion of the church is that it has largely abandoned the use of these creeds. Though the Bible is our final authority, we must never neglect the illumination of Scripture the Holy Spirit has through these creeds.

Finally, Brown’s book will give those who read it a greater confidence in the promises of Jesus. Christ promised that the very gates of hell would not be able to prevail against the church (Matt. 16:18). Looking at the church and the world today, it can be quite easy to wonder whether the church will really overcome. The story of the church’s struggle against heresy helps us to be surer of Christ’s promise. Many times in history the orthodox party has come close to extinction. But the orthodox have never been defeated. Remembering this helps us to be more confident in the promises of God and to not draw our theology from current events. The true church will be the church triumphant.