With Heart and Mouth 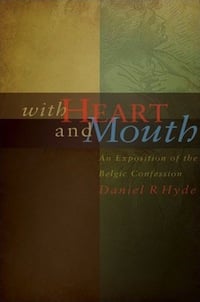 Dr. R. Scott Clark of Westminster Theological Seminary in California recently published a book titled Recovering the Reformed Confession (P&R, 2008), a call for Reformed believers to recapture a truly confessional theology, piety, and practice. Whether or not his call will be heeded remains to be seen, but one thing that would go a long way toward reaching this goal would be for Reformed believers to become reacquainted with what their confessions teach. There are a number of great commentaries on the Westminster Confession of Faith, including those by Shaw, Hodge, and Sproul. Many Reformed believers, however, adhere to the Three Forms of Unity: The Belgic Confession, the Heidelberg Catechism, and the Canons of Dort. There are fewer English language expositions of these great confessional documents, which is why the recent work by Daniel R. Hyde on the Belgic Confession is so welcome.

In the first chapter, Hyde provides some helpful context by describing the historical events surrounding the writing of the Belgic Confession. He also provides a brief outline of the life of its author Guy de Bres (1522–1567). The second chapter is an outline of the Belgic Confession itself. Each of the remaining chapters focuses on the 39 articles of the Confession. Each chapter dealing with an article from the Confession includes the article itself, an exposition of the content of the article, and study questions (the chapter on Article 4 does not contain study questions). In the expositional section of each chapter, Rev. Hyde not only explains what the Confession means, but also why and how a proper understanding of each doctrine is practical here and now. The detail of the exposition results in a work that could be used by many as an introductory level systematic theology or sorts.

Rev. Hyde is very obviously a gifted teacher and an outstanding writer. If there is to be a recovery of confessionalism in the Reformed churches, we will need more works of this sort. These are the doctrines for which our forefathers in the faith died to restore to the church. Guy de Bres himself was hanged for his faith. We cannot and should not trade this precious heritage for today’s fleeting theological fads. This book will help you understand what it is the Reformed churches have always confessed and why. I enthusiastically recommend it to all Christians.