The End of the World According to Harold Camping (Part 1) 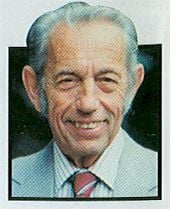 If you were to drive the freeways of southern California, you would see from time to time billboards proclaiming the Judgment Day on May 21, 2011 and declaring that the Bible guarantees it. Presumably these billboards may be seen in many other parts of the country as well. Who is responsible for these signs and what do they really mean theologically?

The signs have been placed by Harold Camping and his followers to warn people that the end is at hand. To understand these signs we must know something of the history as well as the theology of Harold Camping. I am in a somewhat distinctive position to write on this subject since I first met Camping in the late 1950s. I learned a great deal from him then, and so I find what follows a very sad story. I pray for him that the Lord will deliver him from the serious errors into which he has fallen.

While a high school student in Alameda, California, I began to attend the Alameda Christian Reformed Church. It was there that I was converted through the influence of a number of people in the congregation, including Harold Camping. At that time he was an elder in the congregation and taught the Bible lessons for the high school youth group. He was a conservative, traditional adherent of the Christian Reformed Church and would remain so for many years.

In those days the Christian Reformed Church was a strongly ethnic denomination and the congregation in Alameda was almost entirely Dutch in background. The CRC was also still strictly Reformed, interpreting the Bible in light of the church’s confessional standards: the Belgic Confession, the Heidelberg Catechism, and the Canons of Dort. Camping strongly embraced and taught the doctrine and piety of the CRC in which he had been raised.

The Christian Reformed Church, like all Presbyterian and Reformed churches, also stressed the importance of a carefully and thoroughly educated ministry. The church certainly taught the Reformation doctrine that the Scripture is clear in its teaching of the message of salvation. At the same time it also recognized that the Lord had given his church pastors to open the Word of God and preserve the church in the truth (Ephesians 4:4-14). The faithful preaching of these pastors was a means of grace by which the saints were built up. For this vital calling, ministers were educated to read the Bible in Greek and Hebrew, to understand how to read the various genres in the Bible, and how to interpret each part of the Bible in light of the whole. The best handling of the Scriptures required excellent education.

Camping was a bright and studious man who had been educated as an engineer. In the 1950s he owned a very successful construction company which built churches as well as other significant buildings. This educational background is critical to understanding Camping. His education was not in the liberal arts or theology. He had not been prepared to read literature or ancient texts. He knew no Greek or Hebrew. He was not formally introduced to the study of theology. His reading of the Bible, as it evolved over the decades, reflected his training in engineering. He reads the Bible like a mathematical or scientific textbook.

Camping developed, as a good businessman, his construction company and then sold it. With the money he began to build the Christian radio network called Family Radio. This network was very much his own property and his skill developed Family Radio into a group of stations spread throughout the country. Family Radio appealed to many Christians through its programming of Christian music, Bible reading, Bible lessons and messages from various pastors and conference speakers. The teaching was basically Reformed and Camping sought to have as many recordings of Reformed speakers as possible.

Camping himself had a regular program of his own called “Open Forum.” During this program he invited people to call in with questions about the Bible and theology. He promoted a Reformed approach to the Bible and especially confronted and refuted dispensational, Pentecostal, and Arminian theologies. He had a broad and detailed knowledge of the Bible which he used to very good effect in answering questions. He was at one time a most effective and influential promoter of Reformed theology and won many listeners to the Reformed cause.

After Camping began to work full-time with Family Radio, he spent much time studying the Bible. His knowledge of Bible verses is impressive indeed. But his study of the Bible was undertaken in isolation from other Christians and theologians. He adopted a proud individualism. He did not really learn from Bible scholars. He studied the Bible in isolation from the church and the consensus of the faithful. As a result his understanding of the Bible became more and more idiosyncratic. No one could help, direct, or restrain him. He was really an autodidact, that is, someone who teaches himself. He never really submitted his ideas to be challenged and improved by others. He was truly his only teacher. He has repeatedly said that he would be glad to change his views if he is shown that he is wrong from the Bible. But this humble statement covers a very arrogant attitude, because no one can ever show him that he is wrong. He alone really understands the Bible.