St. Augustine was born in A.D. 354 in the town of Thagaste in North Africa to a pagan father and a Christian mother.  From these inauspicious beginnings, he would eventually become one of the most influential thinkers in the history of the Church and Western civilization.  The ramifications of his debates with the Donatists and the Pelagians are still felt to this day in the Church.  His Confessions remains a spiritual classic among Christians of widely varying traditions.  His magnum opus, The City of God laid down the political and religious foundations for the following 1000 years of medieval history.  Those involved in serious theological debate continue to appeal to the writings of Augustine for support. 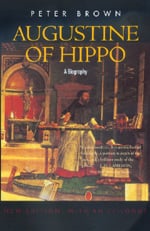 It is too easy, however, for those of us who live over 1500 years after his death to read his works in a vacuum, without taking into consideration the context in which they were written.  We sometimes forget that Augustine was the Bishop of a small port town in North Africa called Hippo Regius and that he was living in a turbulent time in the waning days of the Western Roman Empire.  We forget that he had to deal day in and day out with the pastoral pressures and distractions of a sinful congregation.  We forget that he lived within a particular cultural, historical, religious and philosophical context that shaped his life and his work. Peter Brown has written a magnificent book that helps us to remember all of these things and to see Augustine within his own cultural context.  The original edition of Brown’s biography was published in 1967, and since then it has attained the status of a modern classic.  Brown was inspired to offer a new edition with an epilogue because of the discovery in 1975 and again in 1990 of a number of previously unknown letters and sermons of Augustine.  He also desired to comment on the changing state of Augustinian studies in the last thirty years.

The body of the text has remained unchanged.  Those interested in discovering where the author’s thought has either developed or changed altogether are directed to the two new epilogues.

The biography itself is a delight to read.  In addition to having a prose style that is almost poetic at times, Brown’s mastery of the relevant materials makes it possible for him to effortlessly draw the reader into the everyday life and thought of the late fourth century.  Drawing upon sources ranging from official legal documents to simple inscriptions on tombs, he paints a vivid portrait of the cultural air that Augustine breathed.  Augustine is shown to be a flesh and blood human being with the same kinds of struggles and questions that many men and women throughout the centuries have faced.

Part One of the book presents a fascinating glimpse into Augustine’s early life—his relationship with his mother Monica, his education, his friendships, and his early devotion to Manichaeism.  Because Augustine spent some nine years among the Manichees, Brown devotes a fair amount of space to explaining the origin and theology of this dualistic religion.  He explains Augustine’s attraction to it as an answer to the problem of evil as well as the reasons for his ultimate disillusionment with this religion.

Part Two covers the years 386-395, from Augustine’s arrival in Milan to his consecration as coadjutor bishop of Hippo Regius in 395.  In this section, Brown discusses Augustine’s introduction to Neo-Platonic thought, his conversion, his baptism, his important controversy with the Donatists, and the writing of the Confessions.

In Part Three, Brown discusses the years between 395 and 410. He goes into some detail detailing Augustine’s battle with the Donatists, a strict Pharisaical faction that advocated  withdrawal  and separation from the world.  The goal of Augustine’s Catholic Christianity, in contrast, was to transform the world.  The debate between the Donatists and the Catholics was one of the fiercest battles in the first centuries of the church, and its outcome would determine the very nature of the medieval church.

Part Four covers the final years of Augustine’s life from the years 410 to 420.  The world changed dramatically in 410 when the barbarian Alaric entered Rome.  This was the beginning of the end for the western half of the Roman Empire.  The biggest immediate impact that this event had on Augustine was the flood of refugees who fled to North Africa.  Pelagius himself, who would later become Augustine’s greatest nemesis, passed through Hippo at this time.  Unfortunately (because it would have surely been an interesting encounter), Augustine was away at the time and never met him personally.  In these chapters, Brown focuses much of his attention on Augustine’s battles with Pelagius and his followers, and he briefly discusses the later works of Augustine that included such books as the Retractions.

It is almost impossible to overstate Augustine’s influence upon the Christian Church.  Peter Brown has done the Church a great service by providing the world with a wonderful portrayal of the man and his work.  If there are any weaknesses in the book, they are almost inconsequential.  One may hope, of course, that eventually the author will incorporate into the body of the text what he has learned in the 35 years since the publication of the first edition.  He expresses the changes in his thoughts in the new epilogues, and it should be noted that these changes do not significantly detract from the overall worth of the book.

Augustine was undoubtedly the greatest theologian of the early church.  As great as he was, however, he understood better than many of his heirs his own limitations.  I can think of no better conclusion to this review than to remind readers from one of his newly discovered letters what Augustine himself had to say about his own authority and the authority of other non-scriptural works:

We, who preach and write books, write in a manner altogether different from the manner in which the canon of Scriptures has been written.  We write while we make progress.  We learn something new every day.  We dictate at the same time as we explore.  We speak as we still knock for understanding… I urge your Charity, on my behalf and in my own case, that you should not take any previous book or preaching of mine as Holy Scripture… If anyone criticizes me when I have said what is right, he does not do right.  But I would be more angry with the one who praises me and takes what I have written for Gospel truth (canonicum) than the one who criticizes me unfairly (p. 451).