An Epic in the Making

The theme of this month’s Tabletalk is Paradise Lost, which is the title of what most critics would agree is the greatest poem in the English language. John Milton (whose 400th birthday we celebrate today on December 9) was an English puritan revolutionary who helped overthrow King Charles I but whose hopes for a free republic were dashed with the restoration of the monarchy. Narrowly avoiding the death penalty, Milton lost everything. His first marriage was unhappy. After his wife died, he married again, only to have her die in childbirth. He also went blind. In his enforced leisure, Milton, trying to justify the ways of God to himself, turned to Scripture and began an epic meditation on the fall, imagining as no one had done before or since what Eden must have been like, why Satan hates us so, why Eve and Adam ate the fruit, and how the Son of God restores us to a “paradise regained.” 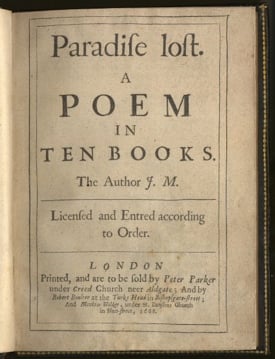 Milton begins, as all epics do, with an invocation to the muse, but his muse is the one who taught Moses “how the Heav’ns and Earth rose out of chaos,” that is, the Holy Spirit. He includes all of the necessary battles, but they are spiritual battles. He creates a compelling character, Satan, whose pride and spite goes beyond Achilles and whose deception exceeds that of Odysseus. Satan, who would rather rule in hell than serve in heaven, may well be the hero according to pagan readings, but Milton repudiates that kind of heroism in favor of the “better fortitude / Of patience and heroic martyrdom.” The heroism of patience that bears suffering with courage is evident in the repentant Adam and Eve, though both kinds of heroism are fulfilled in the Son of God, who blows away the rebel angels on the battlefield and who volunteers to take upon Himself man’s penalty for the fall by suffering death on the cross.

As Milton imagines it, Satan’s fall preceded man’s fall. The angel Satan rebels out of a sense of “injured merit” in response to the Father’s manifestation of His Son. He seduces other angels and wages war against heaven. When they are all cast out into hell — imagined not as the center of the earth but as something akin to a planet, whose surface of fiery liquid reminds a modern reader of Jupiter — Satan devises one way of striking back at an enemy who is omnipotent: destroy those whom He loves. Or better, destroy the loving relationship between the newly-created mankind and God. He will “Seduce them to our party, that their God / May prove their foe.”

Meanwhile, Adam and Eve are living in a luxuriant, sensual, glorious Paradise. Their mutual love for each other is fervent and passionate. Their innocence is not childlike, but wise and strong. An angel visits them, recounting how God created the universe, describing Satan’s fall, and giving them fair warning, emphasizing that they must not partake of the Tree of the Knowledge of Good and Evil. Adam and Eve are “sufficient to have stood, though free to fall.”

As Milton imagines it, Satan is “imbruted” as a serpent — in contrast to the Son of God who will be incarnate as a human being — and speaks praises to a surprised Eve. Knowing that animals cannot talk, Eve asks how it attained rationality and language. The serpent says that it simply ate the fruit of the tree.

Satan’s attempt to persuade Eve to eat of the forbidden fruit is basically an argument from evolution. A beast ate the fruit and became like a human being; therefore, a human being who eats it will likewise ascend to the next level and become like a god. Satan’s arguments — that being like a god and knowing good and evil are worthy goals, that this is surely what God wants them to attain as part of their growth and progress — seem plausible to the point that readers tend to agree that they too would have fallen for Satan’s lies, proving their own complicity in the fall.

After Eve eats the fruit, she offers some to Adam. Appalled and recognizing what she has done, Adam eats the fruit in clear knowledge, undeceived, simply because he loves her. He does not want to live without Eve, or with some other woman whom God might make from another rib; so, faced with a choice of God or his wife, he eats the fruit. This misplaced romanticism, however, soon turns into bitter hatred, until, after hearing God’s judgment, Eve initiates their repentant reconciliation. Whereupon they reject the temptations of suicide and of not having children, remembering God’s promise that one of Eve’s descendants will crush Satan’s head and undo their fall.

Milton would later take up this theme in his sequel Paradise Regained, a much shorter “brief epic” that is not read nearly as often as his account of how Paradise was lost. Milton focuses not on the end of Jesus’ ministry but at the very beginning when He too endured Satan’s temptation. But whereas Eve and Adam gave in to temptation, Jesus did not. He fulfilled all of the Law. He bore our sins on the cross, and in the great exchange, imputed to us His righteousness.

Satan tempts Jesus with food, pride, and the kingdoms of the world. But on the pinnacle of the temple, Jesus replies, “It is written, ‘tempt not the Lord thy God.’” At this revelation, “Satan, smitten with amazement, fell.” Now, not man but Satan falls when he realizes with whom he is dealing.

*****
Dr. Gene Edward Veith is academic dean of Patrick Henry College in Purcellville, Virginia, and is author of Reading Between the Lines: A Christian Guide to Literature. 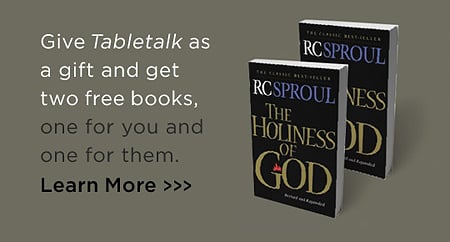