6 Reasons to Read “God in Our Midst”

Like me, you probably have been disappointed by many books on the Old Testament. The covers look great, the titles sound enticing, and the blurbs appear exciting. But one chapter in and you begin to flag. They are so boring, so academic, so impractical, and so suitable for your large pile of “read-one-chapter” books.

First, I want a reverent and diligent handling of the text of Scripture. For too long the Old Testament text has been treated with less respect than a daily newspaper. It has been attacked, lampooned, and neglected, not just by those outside the church but by many within it. So, I want to be sure that the author views the Old Testament as the inspired Word of God, and then works hard to mine the maximum meaning out of each precious word.

Second, I expect any interpretation to start with the original context and park there for a while. Many books and sermons seem to regard the Old Testament as something hot off the presses and addressed directly to twenty-first-century culture. They fail to consider the original message to the original audience thousands of years ago and thousands of miles away. If you want to get on the wrong track immediately and lead others astray, that’s a sure-fire way of doing it.

Third, while accounting for the slow, progressive unfolding of God’s truth over many years, the book should portray that truth as having one clear and constant message. At times, some writers imply that God started with Plan A, and when that didn’t work He tried Plan B, then C, then D, and so on. In other words, instead of seeing God’s message of a gracious salvation for sinners through the Messiah as one seed that gradually grows from root to shoot to stem to flower to fruit, they imply that God was forever starting over; planting then uprooting, replanting then uprooting, over and over again.

Fourth, I look for a book that follows Jesus’ and His disciples’ example in using the New Testament to interpret the Old. I know of one Old Testament professor who refuses to allow any New Testament verse ever to be mentioned in his classes; that’s kind of like studying with the lights off. Of course, we should not read into the Old Testament what was known only to those in the New, but as Christ and His Apostles make clear, there was a lot more knowledge of the gospel in Old Testament times than is usually thought.

Sixth, the book must apply the truth to the modern church. Too many Old Testament books are addressed only to the head. They stop far short of connecting the truth to people’s hearts and lives. Worship, communion, obedience, and service are almost swear words to some writers.

Well, you’re probably thinking by now, “There aren’t many Old Testament books like that today, are there?” You’re right, I’m afraid. But I’m glad to announce that one has just been added to their ranks. It’s this book on the tabernacle by my friend Danny Hyde, and what a rare treat it is to read! 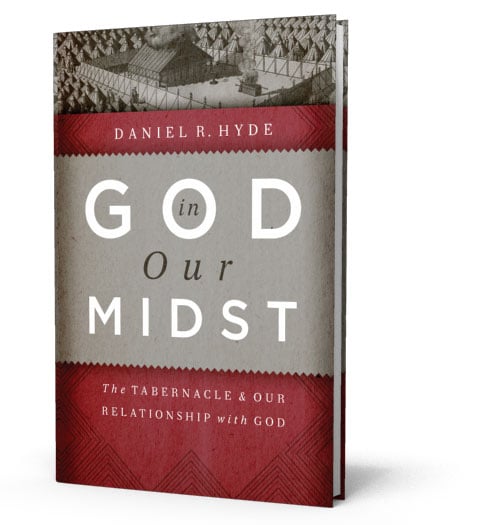 Danny handles the text with reverent care and rigorous diligence, mining the text for all its meat and milk. He describes the original context, people, and situation so graphically that eventually you wonder if he possibly lived in tabernacle times. While respecting the varying degrees of revelation through the ages, he demonstrates the covenantal unity of God’s sovereign and gracious plan in both testaments. He avoids the pitfall of imputing New Testament understanding to Old Testament believers, but also welcomes the graciously provided light of the New to understand the Old. And he gives us, at last, a modern book on the Old Testament that treats the believing Israelites as brothers and sisters in Christ rather than as slightly confused, animistic, legalistic idolaters. Of course, if you’ve read any of Danny’s previous nine million books (a joke to brighten up the editor’s day), you’ll know that he has a passion to bless the church with books that minister to the head, the heart, and the hand. This book is no different. It will lead you to worship, it will prompt obedience, and perhaps above all it will inspire you to commune with the God who delights to dwell among us and in us.

This will be a great book for pastors and teachers who have been inspired by the wonderful resurgence of interest in the Old Testament, and especially of a Christ-centered understanding of the Old Testament, and yet open their Bibles at Exodus and Leviticus and wonder, “Eh, what do I do now?” Danny shows you.

But any serious Christian will also benefit from this book. It will not only open up previously undiscovered parts of the Bible, it will show you the wonderful unity of the Scriptures from start to finish. Above all, it will inspire you to seek communion with God through Jesus Christ, Immanuel, “God with us.”