Ligonier Ministries’ 2011 National Conference continued Friday morning with R.C. Sproul, Jr. speaking on the sovereignty of God. In a lecture titled “Almighty Over All,” Dr. Sproul focused on the question of God’s sovereignty and the reality of suffering. Dr. Sproul began by reading Isaiah 45:1–8. He introduced his message by reminding us that no one really objects to sovereignty over creation or over history. Rather, we object in two other 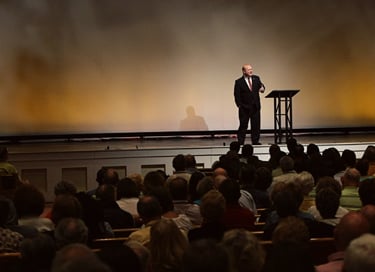 places. First, we object to God’s sovereignty in our salvation. We do this for two reasons – to protect man’s dignity and to protect God’s honor.  But we need to remember that God didn’t construct the world in order to protect our dignity. We also want to protect God’s honor. We ask ourselves: If the difference between those who are saved and those who are not depends on God, then isn’t God unfair? We should, however, never be embarrassed by who God is or what God does.

We also object to God’s sovereignty in suffering. We have those, who in the face of suffering suggest blithely, “God had nothing to do with this.” So why would God allow, or even bring to pass, as our text suggests, suffering or calamity? We doubt this because we don’t understand the purpose for it. We don’t understand why. Some suggest what Dr. Sproul calls the Dr. Pangloss theory. They suggest that this is the best of all possible worlds. This is not a good explanation.

What then are the reasons God has to allow human suffering? First, we need to consider Genesis 3. Humans suffer as punishment from God. We disobey God, and the just thing is that we should suffer for it. This ought to set the stage for all our understanding about suffering and God’s sovereignty. No matter what we are suffering, we are living in the lap of God’s grace. None of us ever gets worse than we deserve. What God owes us is death and destruction. Why do bad things happen to good people? Well, that only happened once, and He volunteered.

We see a second reason for suffering in Job 1:6–8. Satan comes before God. And we know the rest of the story. Job loses everything, and his friends offer less than helpful counsel. We are told that Job suffered what he suffered because God had a bet with the devil, but he did not get worse that he deserved. We learn that God is interested in manifesting His glory through this test. But we need to remember, that Satan had to get God’s permission. Suffering is not under Satan’s control. The devil is God’s devil and he is on God’s leash.

John 9 shows us still another reason – the manifestation of God’s glory. There are two miracles here – the healing of the blind man, and the fact that Jesus kept His cool with the disciples. The lesson of Job is that you cannot create a ratio of suffering to sin. Jesus said the man was born blind that the glory of God might be made known. Sometimes God sends suffering so that God can alleviate suffering.

The fourth reason can be seen in Paul’s thorn in the flesh. It was given to Paul so that he would remember his dependence on God. Suffering can be a means of sanctification. So we have these reasons – punishment, a wager with the devil, the manifestation of God’s glory, and our sanctification. The problem with that long of a list is that we want to know exactly. We want to know what God is doing with us right now. We have to be careful, however, that we don’t think we can always know what God is doing all the time.

Here is what we can know about our own suffering. First, if you are in Christ, the first item on the list doesn’t apply to you. Your suffering is not a punishment. If you are in Christ, Jesus was already punished for you. Regarding the second possible reason, namely a wager with the devil, we can’t know whether that is the case. However, whatever suffering we are called to, it always happens for God’s glory and for our good – specifically for our sanctification.  This why we need to rejoice in all things.

Dr. Sproul concluded his message by telling of his daughter Shannon’s condition and how she has been used to sanctify his family. He then told of his wife’s battle with breast cancer, bone cancer, and now leukemia. He also told of his own battle with cancer. He shared how he and his wife have preached the truth of God’s sovereignty to each other throughout all of this because they both know that God is doing these things to make them both more like Jesus.

So wow do we respond in the light of our suffering? Job response should be our response: “The Lord giveth and the Lord taketh away, blessed be the name of the Lord.”