In every era of history, the holiness of God has been under assault. Satan is the original antagonist against God. The principle attack of Satan against the holiness of God is aimed at impugning and assaulting the character of His being and His word.

In Genesis 3, we see illustrated the method of the evil one – a method employed with success on our first parents, and employed with equal success in the world at large in our day.  The attack of 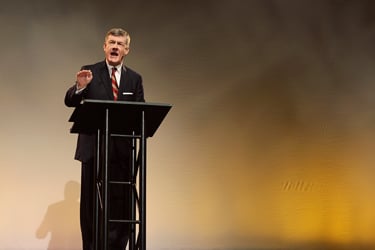 Satan starts with doubt – doubt of the inerrancy and infallibility of the word of God (“Did God actually say…?”).  In Genesis 3:1, Satan initiates the attack against Eve with a seemingly innocent question – but one which plans a beachhead of doubt in Eve’s mind.  Satan’s question was nothing less than an attempt to draw a veil of doubt in Eve’s mind regarding the truthfulness of God.  We see similar fallacies in the emergent church today, which prizes uncertainty as humility and regards certainty as pride.  In contrast, Martin Luther said, “Take away assertions and you take away Christianity.”

Next comes distortion. Satan puts words into God’s mouth, with intentionality, to shed doubt on God’s character and goodness. Satan says: “Did God actually say, ‘You shall not eat of any tree in the garden’?” Actually, God had granted enormous permission to eat of the trees in the garden - with just one exception. God is far more gracious then Satan allows.

Third comes denial. Satan says: “You shall not surely die.”  Satan boldly denies what God said.  In our day, Satan is a universalist, propagating the notion that there is no judgment to come. But there is no good news without bad news. And it’s the bad news that makes the good news so glorious.

Fourth comes defamation.  “For God knows that when you eat of it your eyes will be opened.” Satan makes the command of God nothing more than a manipulative tool on the part of God to keep Adam and Eve in the place of ignorant slaves.

And fifth comes deification – the promise of divinity. “You shall become like God.” But disobedience has never led to becoming like God. It has always led to death, both for individuals and for ministries.

The issues in our day are, at their core, variations on one theme: the battle for the inerrancy and infallibility and sufficiency of the Word of God.  May God give us confidence in His perfect book.