This evening we opened with a panel discussion with Voddie Baucham, George Grant, Michael Morales, R.C. Sproul and R.C. Sproul Jr. Chris Larson, executive vice-president of Ligonier Ministries, moderated the discussion followed by questions from the audience. Here is a summary of some of the topics of conversation.

Chris Larson: Dr. Sproul, tell us about your vision for a Bible college.

R.C. Sproul: Twenty years ago, I had a meeting with a board member and we talked about the Kingdom needs in Orlando—we talked about the need for a classical Christian school and started one of those. I was also a founding dean of Reformed Theological Seminary in Orlando, bringing that initiative down from Jackson, MS. But while speaking, we realized one thing we didn’t have is a reformed Bible college. I’m only aware of one other. 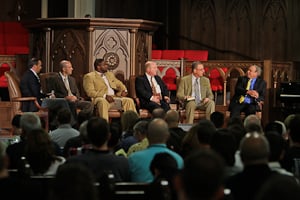 Several factors combined to make me think of the importance of this need. We had this historical phenomena of mainline evangelicalism by dispensationalism which was an innovation at end of 19th century and spread like wildfire. But people didn’t realize it was a departure from historic Christianity. The Scofield Reference Bible was published, and colleges and seminaries grew out of this phenomena. Seminaries went to the left but I noticed the students from Bible colleges would recognize that and go a different direction. I figured if you can get students at the college level they can be productive students for the rest of their lives.

The idea was a dream. It became a goal and then a reality due to the support of our constituents.

CL: What did you think of George Grant’s message this afternoon and how it ties in to the curriculum of the school?

RC: That message emphasized the importance and necessity of grounding people in the great Book. I can’t imagine anyone doing a better job or a better keynote address for the launching of a college devoted to the great Book.

CL: You all have experience in higher education and have seen the attention put on the Bible. Why is there an emphasis in the Bible’s pre-eminence?

R.C. Sproul Jr.: If education is just the delivery of information and it’s not about changing who we are but equipping us to do this or that, then they’re right. It won’t teach you how to write computer programs or balance your books. It will, however, teach you to be an honest and diligent man which gets to the heart. The whole idea of separating the knowledge from discipleship is the root of the problem. You can still err if you think the Bible is just a pile of content to be mastered.

RC: True education leads us out of the darkness of the fallen mind to the light. Education presupposes the need for the Word of God. 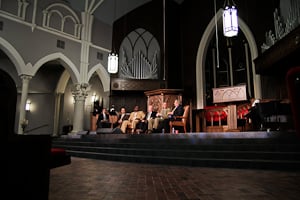 Voddie Baucham: We tend to believe acquiring knowledge is an end unto itself. If we pursue God, we have the greatest good that there is to attain. All of a sudden we see the acquisition of knowledge as on par with developing character and discipleship is a way to follow and emulate people that walk in that way.

CL: How do the other solas flow out of sola Scriptura?

JR: The gospel is not like “there’s a problem” and God tries to figure out how to solve it. The gospel of Scripture is the revelation of who God is. This flows out of his character. When you let this Book tell you who God is, it will show you how we can relate and its purposes to glorify his Son (sola Christus) and in that glorify himself (sola deo gloria). Those solas, like this Book, tell us who God is.

RC: There’s also the historical context of sola Scriptura. It was the formal cause of the reformation. Luther was driving to stand for the gospel because of his prior commitment to sola Scriptura—the solas were set on the Word of God and not on the trade of the church.

Audience: Is it possible for a born-again, Bible-fearing believer to be a liberal, progressive democrat?

RC: I would say yes.

JR: I believe the Bible speaks to every conceivable issue there is, but culturally speaking we have come to define evangelical by our political mood rather than our convictions about what the Bible teaches about how we can have peace with God.

Audience: I’m often baffled by the limitations of words when talking about the autobiography of God. What do we do when words don’t say enough because He is infinite?