In order to maintain peace, purity, and unity in the church, it is necessary to exercise discipline, sometimes even to the point of excommunication. In this lecture Dr. Steven Lawson closes out our conference with his lecture on “The Blessing of Discipline.”

It is actually reported that there is sexual immorality among you, and of a kind that is not tolerated even among pagans, for a man has his father’s wife. And you are arrogant! Ought you not rather to mourn? Let him who has done this be removed from among you.

For though absent in body, I am present in spirit; and as if present, I have already pronounced judgment on the one who did such a thing. When you are assembled in the name of the Lord Jesus and my spirit is present, with the power of our Lord Jesus, you are to deliver this man to Satan for the destruction of the flesh, so that his spirit may be saved in the day of the Lord.

It is a fundamental principle that the church must be different than the world, in order to have an impact in the world. When the church becomes like the world, it loses its influence. Yet, it has been 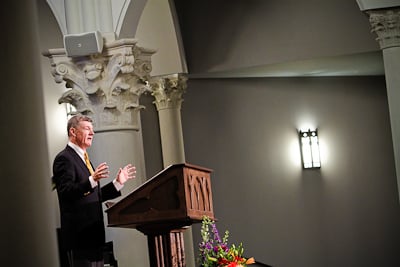 the practice of many churches to think that we should look like the world in order to attract the world, and the fear of God has evaporated from their midst.

In 1 Corinthians 5, the church failed to deal with sin in their congregation. It chose to coddle sin rather than confront it. This entire chapter speaks to this very issue: “Let him who has done this be removed from among you” (v. 2); “deliver this man to Satan for the destruction of the flesh” (v. 5); “do not associate with sexually immoral people” (v. 9). You are to separate from him and cut him off from the church. Why? In order to be taught not to blaspheme our Lord.

This language is found throughout scripture: “As for those who persist in sin, rebuke them in the presence of all, so that the rest may stand in fear” (1 Tim. 5:20), and, “As for a person who stirs up division, ​after warning him once and then twice, t​have nothing more to do with him” (Titus 3:10). In these verses, Paul calls the leadership and the entire congregation to practice this in order to establish peace and purity. The church must be different than the world if we are to win the world to Christ.

We will consider this chapter under four main headings.

“It is actually reported that there is sexual immorality among you, and of a kind that is not tolerated even among pagans, for a man has his father’s wife. And you are arrogant! Ought you not rather to mourn? Let him who has done this be removed from among you” (1 Cor. 5:1–2). This communicates something that this church has failed to do, even while everyone in the community knows about this immoral situation. This was an immorality of such a kind that is not tolerated even among the Gentiles. And Paul goes on to name the sin at the end of verse 1 as a man having illicit sexual relationship with his stepmother. Paul puts his finger on this sin, and indicts the church for not exercising proper spiritual leadership.

“Let him who has done this be removed from among you” (v. 2). This means to excommunicate him from your church, to remove him. Verses 7 and 11 say similarly, “Cleanse out the old leaven that you may be a new lump,” and “Purge the evil person from among you.”

We see the steps leading to this in Matthew chapter 18:15–18. Verse 15 reads, “If your brother sins against you, go and tell him his fault, between you and him alone.” We are to come along side this man, approaching him the way we would want to be approached, and coming to him with love. “Between you and him alone,” it is not to be done in front of other people where he may be inclined to react poorly; this will also give him the space to repent. “But if he does not listen, take one or two others along with you, that every charge may be established ​by the evidence of two or three witnesses” (v. 16). If he fails to examine himself and does not listen, “take one or two others.” The intent here is not to gang up on the man, but to account things rightly. “If he refuses to listen to them, tell it to the church” (v. 17a). You are now calling upon the whole church to pray for this brother, or so-called brother, to urge him to repentance, and to ask for the whole church to rally around him with prayer and eagerness toward restoration. “And if he refuses to listen even to the church, let him be to you as s​a Gentile and ​a tax collector” (v. 17b). In other words, he is to be removed from the church and the privileges that the people of God experience. The intent here is that he would realize his sin, and we could kill the fatted calf and welcome him back in.

Verse 5 is the knockout punch in this passage. If this were not in the bible, one may find it hard to believe. Verse 5 reads, “you are to deliver this man to Satan for the destruction of the flesh, so that his spirit may be saved in the day of the Lord.”

In the book of Acts, the first act of church discipline was carried out by God, who struck down Ananias and Sapphira. Moses struck the rock and God forbade him from entering the promise land. Paul says to the church a Corinth that he will do what there were too cowardly to do, because of the pride and arrogance in their hearts. With this excommunication going on, the end of verse 5 should not be overlooked, it displays the patience and kindness that we are to have in going through church discipline. Paul is involved in an evangelistic endeavor in hope that this man will ultimately come to repentance.

Preservation of the church

Without the loving discipline of the church, the church will become like the world.

Verse 6 reads, “Your boasting is not good.” They were proud as if they were living the high life and thinking about how great their church is. And Paul tells them, “Do you not know that g​a little leaven leavens the whole lump?” (v. 6). The sin cannot be segmented, and given time it will saturate and affect the entire body. If intervention does not happen in this matter, it will spread throughout the entire church.

Notice this, when this man is put off, he is to be separated from the church: they are not to have lunch with him, go on walks with him, or hang out with him in any way. This is not meant to be cruel, but it is important that the church not communicate acceptance for this kind of leavening.

In verses 9–12, Paul makes a distinction between people in the world, and immoral people in the church. Immorality is viewed differently when it is inside the church. Peter says let judgment begin in the household of God (1 Peter 4:17). We are to go after the world, and compel them to come into the church. It was Jesus that ate with prostitutes and tax collectors. We are to go after the lost. But for those within the church, it is a totally different story. Paul says in verses 9–12:

I wrote to you in my letter not to associate with sexually immoral people— not at all meaning l​the sexually immoral of this world, or the greedy and swindlers, or idolaters, m​since then you would need to go out of the world. But now I am writing to you not to associate with anyone n​who bears the name of brother if he is guilty of sexual immorality or greed, or is an idolater, reviler, drunkard, or swindler—not even to eat with such a one. For what have I to do with judging outsiders? ​Is it not those inside the church whom you are to judge?

The focus here is clearly on our responsibility to guard and preserve the church. We are to stay clear, not of the world, but such people that are inside the church.

“God judges those outside. ‘Purge the evil person from among you’”

God judges those in the world. But then Paul quotes this Old Testament text of Deuteronomy and says to remove the wicked man from among yourselves.

What are the blessings of discipline?

1. It is for the good of the one who is disciplined. May it be used of God as a last resort in order to reach him for Christ before he self-destructs.

2. It is for the good of other Christians, because it puts the fear of God into their hearts and cultivates a healthy sense of accountability before God.

3. It is for the good of the church. It preserves the holiness of the church, because a little leaven, leavens the whole lump.