Question: Dr. Sproul spoke of the tyranny of the weaker brother yesterday and some principles for dealing with this problem.  Is there a corresponding principle that can help when dealing with the problem of legalism?

Q: Isn’t it the case that we have this struggle because we have difficulty figuring out whether a particular issue is adiaphora or not?

R.C. Sproul, Jr.: Years ago, I was involved in a dispute about education and was accused of legalism.  When asked by someone about this, I said: If I’m wrong, I’m a legalist.  If they are wrong, they are antinomians. 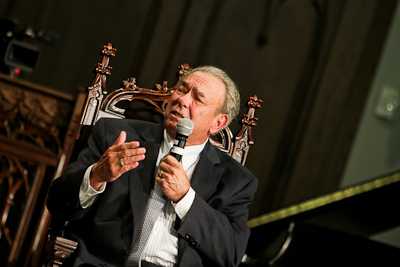 R.C. Sproul: The way we discover whether something is adiaphora or not is by searching Scripture and seeking the mind of Christ.  A lot of confusion is based on simple ignorance.  We don’t know what God has required of us.  A man of God, however, meditates on the Word of God.

A major problem is that the truth of God is exchanged for a lie.  The test of our sanctification becomes trivialized.  It is far easier to abstain from dancing or going to movies than it is to manifest the true fruit of the spirit.

John Murray’s book on Christian ethics (Principles of Conduct) is in my top 10 books of all time.  Murray says that the difference between right and wrong is not always a gaping chasm.  It is usually a razor’s edge.  That’s why it takes profound discernment of Scripture teaching.

We have to remember that there is a hierarchy of sin.  Some sins are simply more serious that others.  Of course, all sin is sin, but not all sins are equally serious.  The Pharisees majored in the minors.  They minimized some sins and elevated others.

There is in the Bible a continuum.  Some actions clearly fall on one side or the other.  Some are clearly and obviously good, while some are clearly and obviously evil.  But for many actions, it is difficult to tell.  Now, in God’s sight there is no gray area.  We speak of gray areas from a human perspective because there are some ethical questions about which we remain uncertain.  Medical ethics, for example, raise very difficult issues.

Here is an example: I used to give my students this scenario: A man and wife are captured during the Nazi reign, taken to a concentration camp, and housed separately.  A guard comes to the wife and says, “If you don’t sleep with me, we’ll shoot your husband.”  She acquiesces.  Later, the concentration camp is liberated. The husband finds out what happened and asks his wife why?  She tells him, but he is not satisfied.  He files for divorce on the grounds of adultery.  I asked my students: How many think he has grounds for adultery?  Every student said yes.  I disagree.  She was raped.  The knife wasn’t held to her throat, but it was held to her husband’s throat.  The sexual act was coercive not voluntary.  After discussing all of this, every student changed their mind.

Learning the biblical principles is a gargantuan task.  The more difficult task, however, is applying the principles.

Q:   How do our deceitful hearts lead us to distort God’s law?  How do we fool ourselves about our sin?

Steve Lawson: We know our own heart by the Word of God, which is a mirror of the self.  We also learn of our sins by learning of the character of God.  As we learn of God’s holiness, we discover our lack of holiness.  The Spirit of God also convicts us.  We need the counsel of others such as Nathan with David.  Finally, our consciences expose our sin to us.

We fool ourselves by shielding ourselves from that which exposes our sins to us.

Steve Lawson: The one who ministers the Word must watch over his own soul.  I have a greater exposure to the Word of God because of the time spent studying and meditating on that portion of Scripture I plan to preach.  There is a powerful conviction of sin that comes to my own heart.  It forces me to deal with things in my own life.  I must be a repenter and confessor of my own sin.  I must step in the pulpit with clean hands and heart.

R.C. Sproul, Jr.: I’m persuaded that although we want to encourage sound theology and sound hermeneutics, what we especially need is more courage in the pulpit.  We need the courage to look at our own sins.

Q: For many here, the context of last night’s service may have been a bit unusual.  What are the ways in which our services and liturgies do well or do not do well in communicating points of taught in last night’s sermon on Ezekiel 1?

R.C. Sproul: When I think of that, I can’t help but think about John Calvin.  At the time of the Reformation there was no leader or theologian who was more profoundly dedicated to worship than Calvin.  Recovery of the gospel was central for him as it was for Luther.  But Calvin was also almost obsessed with purifying the church from idolatry.  He explained that the fundamental sin of fallen man is idolatry.  Romans 1, for example, teaches us that the universal response of man is to suppress the truth and replace the Creator with the creature.  We are idol factories.

Calvin wanted to make sure the idolatrous practices that had crept in to the Roman Church were expunged.  Calvin didn’t see it as a necessarily permanent thing, but people were so caught up in abuse that he had to at least temporarily remove anything that contributed to it.  Calvin also would not allow the singing of hymns until he was kicked out of Geneva and went to Strassbourg.  There he worked with Bucer, who introduced congregational singing into the church.  Calvin changed his mind when he saw what that kind of singing could do. He introduced it when he returned to Geneva.

What drove Calvin was trying to discern what pleases God.  Is worship adiaphorous?  No.  The Old Testament is part of the Bible.  It is a book that includes the content of special revelation.  The closest thing to dictation in the Bible is God’s revelation of how the tabernacle is to be built, how the vessels of the tabernacle are to be made, how the garments are to be made, and how worship is to proceed.

Some say the Old Testament has no bearing on New Testament worship at all. Others have high liturgies.  Both sides have tried to structure worship in way pleasing to God.  Here is how I approach it.  In the Old Testament, God himself revealed how He was to be worshiped.  I notice that in the heart of worship the mind is to be addressed, thus the Word is central, preaching is central.  But in Old Testament worship, there was also a visual dimension.  God commanded that the articles for the tabernacle be created for beauty and for holiness.  What in the New Testament now makes God indifferent to beauty?  There was also an auditory element in Old Testament worship: beautiful songs and instruments and choirs.  The Old Testament feasts involved the sense of taste.  Touch is involved in the benediction.  We shake hands with people because people want to experience the touch of fellowship.  If it were up to me, yes, I would also have incense.  The church should smell different from any other building.

There is no one formula for worship, but at Saint Andrews, we want people who walk in to immediately feel lifted up.  Of course all form and symbolism can degenerate into mere formalism and externalism, so we always have to guard against that.

Steve Lawson: For those of us who do not attend church here, there are noticeable things. The pulpit and its elevation, for example, give a sense of transcendence.  It creates the impression of the Word of God coming down to us from above.

So many new churches want a casual experience.  There is no sense of having an audience with a king.  The tone of service last night was certainly not casual.  It was one of great respect and reverence.