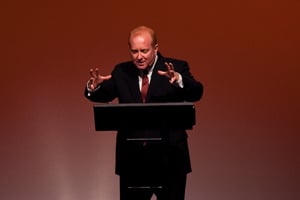 Dr. R.C. Sproul Jr. is the founder of the Highlands Study Center in Mendota, Va., which seeks to help Christians live more simple, separate, and deliberate lives to the glory of God and for the building of His kingdom. Dr. Sproul travels extensively as a conference speaker and has written several books including Tearing Down Strongholds, When You Rise Up, Bound for Glory, Biblical Economics, and Believing God.   Dr. Sproul Jr. message took up the question Why Do Christians still sin?  And Why Do I still sin?  He took his text from Romans 7:14-25.

DOES THE PASSAGE DESCRIBE SAUL OR PAUL?

Is it pre-converted Paul or post-converted Paul? This is post-conversion Paul, because he desires to do the law of God (verse 18b).  Dr. Sproul Jr. recalls his dad telling him that before he was a Christian life was easy (in a sense) because there was yet no struggle with sin.

Battle #1: The seed of the serpent have an internal battle because they are made in the image of God, yet they are given over to sin. That’s why your non-Christian neighbors love their kids. The image of God struggles with their slavery to sin.

Battle #2: Those of us who are of the seed of the woman, we have a struggle with sin, although Jesus has already won this battle.  Jesus told His disciples to take heard because He had already overcome the world. We have (as Christians) already won, but our old man (in his death throes) creates the battle that Paul describes in Romans 7:14-25.  We sin because we are still sinners.

WHY DOESN’T GOD STOP US FROM SINNING?

The whole of the created order is the theatre of God’s glory (cf. Psalm 19). And theatres do not exist for themselves. They exist for the sake of the story.  For stories to work there needs to be tension, and that tension has to ultimately be resolved.  The story is the story of our battle with sin.  The grace of God in our lives is a central aspect to the story; sin allows the grace of God to be manifest in the story. Remember, Jesus said the one who is forgiven much, loves much.  Sin drives us to Christ for forgiveness, and then we rejoice in the forgiveness that we have in him.

The story will end someday. God is glorified in winning this battle. Our sins are a part of our lives to drive us to despair - but briefly. Repentance is the shift, the change which brings God’s forgiveness and (consequently) our joy.

We need to enter into the depth of our sin to have an appreciation for the peace and rest that God provides for us. We’re supposed to long for God’s peace and rest. “Cry unto her that her warfare is accomplished.”

GETTING BETTER AND FEELING WORSE

We are going to the place where the battle is no more - where we will have rest. If we confess our sins, He is faithful and just to forgive us our sins and to cleanse us from all unrighteousness (I John 1:9). We are called to walk by faith, not by sight.  Yet it is quite difficult for us not to see our sins.  After all, the further we get with regard to personal holiness the more odious our remaining sins appear.

In our sanctification, we are getting better and feeling worse (because we are more mindful of our need to continually mortify sin).  And we are going to win.  Jesus is both the Author and the Finisher of our faith.  We often despair in sanctification because we think we are in it on our own. But Jesus promises to get us there.

Our sins impact others, to whom we must apologize. Hopefully, they forgive us. But God’s promise is that He’ll forgive us always.  Yet we don’t think of heaven enough.  We need to be talking not just about how to get to heaven but about what it will be like there.  There are two truths to rejoice in: (1) We will be forgiven and (2) we will no longer sin.

The promise is that we will enter into our rest and sin no more. The precious hope to the Hebrew saints (and to us) is that we will see God.  Have you ever wondered if you will be bored in heaven? The answer is no, we won’t. Because we will see God and live. For now, if we see God, we will explode because God’s glory is too much for us. Seeing God is like taking a toaster and plugging it into a nuclear power plant. The toaster doesn’t have the capacity to handle all that power.

In heaven, when we are at rest and at peace, we will see Him and live. By the death of the Son we become sons. See how much love He has for us, that we should be called the children of God. Many of us fear disappointing our heavenly (and earthly) fathers. But the gospel teaches us that God the Father loves us now as much as He loves His son Jesus.  Every ounce of wrath is gone and spent 2000 years ago. Because He loves us as sons, we will see Him.

But what are we going to be?  I don’t know, the Apostle John says. But this much we do know: When we see Him, we will be like Him. The beatific vision itself is such that it makes us like Him (I John 3:1-2). This (and not the destruction of his and our enemies) is the glory of eternity.